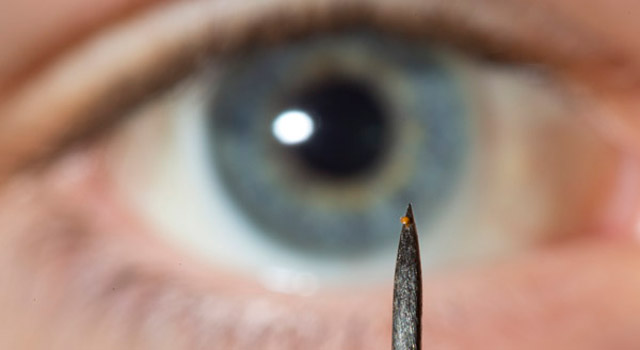 The plant Arabidopsis thaliana produces seeds so minuscule that 5,000 can fit on a thumbnail. This past summer student-researchers Bryan Dahms ’13 and Ben Sonnenberg ’14 counted more than 30,000 seeds as part of a study. (Photo by John Froschauer)

This past summer, Bryan Dahms ’13 was sitting in a lab with fellow student-researcher Ben Sonnenberg ’14, counting 30,000 seeds so minuscule that 5,000 can fit on a thumbnail. It took days.

Dahms asked himself, “What did I get myself into?”

As a biology major who has an interest in molecular biology and hopes to go to medical school, he never thought he’d be studying plants as part of a student-faculty research project.

“I really didn’t care for plants all that much,” he said. “But I came in with an open mind of what I can do and what I can learn, and really had one of the best summers of my life.”

Dahms was asked to join Sonnenberg – a professed “plant nut” – and Assistant Professor of Biology Neva Laurie-Berry to investigate altered forms of the receptor for the plant hormone jasmonate, a chemical that controls a plant’s response to infection and injury. In essence, the trio is trying to find out if, by manipulating its receptor, they can make the plant resistant to infection without residual side effects.

Plants have fewer chromosomes than humans, so mutating one part to fight infection might also affect, for example, the size of the plant.

“Could we end up with a tomato plant, for example, that is resistant to a particular infection (but) with the same size fruit?” Laurie-Berry asked.

They studied the plant Arabidopsis thaliana, which is ideal for research because it grows and self-produces seeds at a rapid rate. Laurie-Berry thought Dahms’ interest in molecular biology – specifically how sequencing genetics works – would be a perfect fit for their research. 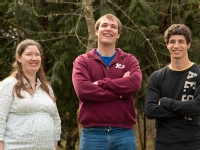 Assistant Professor of Biology Neva Laurie-Berry and student-researchers Ben Sonnenberg ’14 and Bryan Dahms ’13 are investigating altered forms of the receptor for the plant hormone jasmonate.

“I enjoy working with students and getting them excited about it,” Laurie-Berry said. “That’s why I wanted to be somewhere like PLU, where I’d have that opportunity.”

Laurie-Berry certainly saw the opportunity to pair Dahms and his molecular interest with fellow biology major Sonnenberg, who has a strong interest in plants. Together, Laurie-Berry said, they make a perfect team.

“It’s really a team effort to solve a question or get to the next question,” Dahms said. “You create one little brick in this big wall that people will be able to build upon in the future.”

According to Sonnenberg, much of the research on the molecular level deals with human systems. But there’s still so much to learn from how plants work.

This is exactly what brought Laurie-Berry to the study of plant pathology.

“We know a lot less about (plant pathology) compared to animal pathology,” she said. “And it’s incredibly important. How do we make the plant healthier overall, no matter what the fungus or infection?”

Laurie-Berry is very familiar with Arabidopsis thaliana. She has worked with the plant since her time as a graduate student at Washington University in St. Louis, Mo.

Two summers ago, she secured a grant from the MJ Murdoch Charitable Trust to study the plant’s signaling responses to the plant hormone jasmonic acid, or jasmonate. It’s a two-year grant through the Murdoch College Research Program for Life Sciences that covers work by the students and professor from June 2011 through May 2013. As part of the grant agreement, PLU supported sending the group this past summer to a meeting of the American Society of Plant Biologists in Austin, Texas.

At the ASPB meeting the students were able to present their research to Washington State University scientist Bryan Thines, who has done groundbreaking research in jasmonic acid signaling. It is the type of connection a lot of undergraduate students at larger universities would never get to make.

The three worked closely together throughout the summer and into the school year. The research is dependent on the students being active in discovery, asking questions and working with their professor as actual peers.

“PLU students are so driven that what they’re doing makes a difference in the lab,” Laurie-Berry said. “It’s an opportunity that’s a really special thing for undergraduates to be a part of.”

As their research continues, they may not come up with all the answers they seek, but that’s OK, she said.

“I’m hoping by the time they graduate, if we don’t have answers to the questions we have, we know the questions that matter,” Laurie-Berry said. “The answers really don’t tell you anything if you’re asking the wrong questions.”

This experience isn’t about following a recipe to get to a definitive answer.

“Science is not the list of facts in the book,” Laurie-Berry said. “The exciting thing is figuring out what are you totally wrong about. We’re doing this because we don’t know. That’s the great thing about having students who are motivated. This gives them ownership and allows them to make the project their own. It’s not enough that somebody is an A student. There has to be that spark for it.”

Dahms and Sonnenberg have that spark.

“That’s the advice I always give,” Sonnenberg said. “If you take a class and love it, go to the professor and ask more about it. Have that thirst for knowledge.”

Dahms is a perfect example of that. He never thought plant research would open his mind to what he wants to ultimately do, which is to be a medical doctor. But he’s seen how plant research binds to medical practice.

“The beauty of science is that it all relates and is interconnected,” he said. “Science is really about a collaboration of people.”