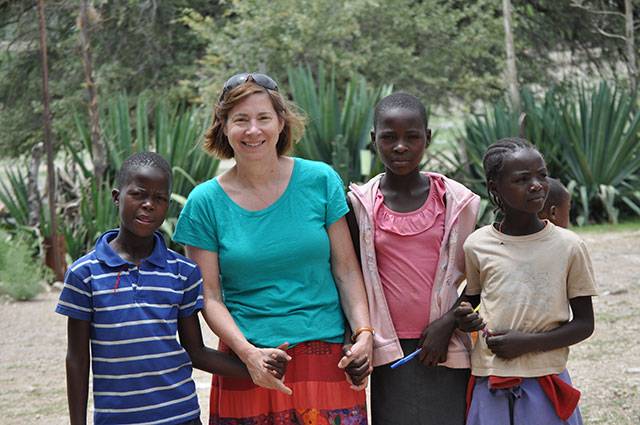 A 22-year-old Jan Weiss walked into the elementary school southeast of Portland, Ore., and looked at her third-grade class. Twenty-five faces looked back. And Weiss realized that she knew nothing about their world, nor they, hers.

Weiss grew up in a relatively prosperous home near San Jose, Calif., where dad was an engineer who worked on the Apollo and Gemini launches for a major aerospace company, and a mom who was a student, then a geographer. Weiss initially turned up her nose at Stanford, since it was too close to home. She opted for an elementary education degree from Lewis and Clark College in Portland.

But the faces looking up at her from the desks had known another, less privileged life.  The recession and timber downturn in the 1970s and early 1980s had hit the families in Oregon City hard.

“They were the kids from the projects, and I at first thought that was a gated community,” said Weiss, who shakes her head at her naiveté, now 25 years later.  When she asked her class what they did on weekends, they cheerfully told her they got to visit K-Mart. “I wasn’t even sure what K-Mart was,” she laughed.

She enjoyed her five years teaching, even starting an annual pancake breakfast that still continues at her former school. But she also discovered that maybe, just maybe, teaching wasn’t for her. Eventually, she returned to Northern California, where she earned her master’s and Ph.D. at Stanford University. Her research focused on the development and burn-out rate of first-year teachers, and what keeps a teacher loyal to a district where they first ply their craft.

It was the “aha” moment for her. Her true calling was helping teachers teach.

“Of course it’s all about the kids,” she said.  But she felt that working with good teachers, and keeping them on the path to their dreams – and avoid burnout – is just as valuable as being in front of a classroom.

“This is what I’m passionate about: teacher development,” she said. It’s a passion that has transported her from Oregon, to Washington, to a tiny Alaskan village and overseas to Namibia in an attempt to sweep away the lingering affects of Apartheid on the education system there.

Weiss started as a visiting professor at PLU in 2003, and then transitioned into a full-time professor in 2005. In 2008, she became the coordinator of undergraduate teaching education. By 2010, she traveled to Namibia as a Fulbright-Hays scholar, returning to the country in 2011-13 as a co-leader in J-Term comparative education courses.

“I knew my first trip to Namibia transformed me,” she said. “I still am unable to totally articulate the transformation, but I know I was a different person when I returned.  Each time I journey to Namibia I become increasingly comfortable in a culture that is so different from what I know or knew.”

Namibia was under South African rule, and apartheid laws, until just about 20 years ago, when the country won its independence. Many of the teachers with whom she worked had experienced what it was to live under Apartheid. 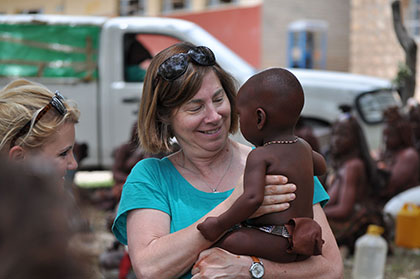 When Weiss returns next January , she will be helping teachers in a country that highly values education, learn to teach in a style that would be familiar to the students at PLU.

“Their students (in Namibia) are used to being told how to do something, so our PLU teachers encourage the children to think,” she said. As well as communicate with each other.

“The teachers learn to start small, like asking the class to share an idea with the person sitting next to you,” Weiss said. “Sometimes this is the first time for students to talk about what they know with a peer.”

The old-style school system in Namibia focused on the inferior “Bantu” education system, where there was only a focus on skills that deemed valuable by the government, she noted. Bricklaying, road work and construction were the trades that were open to black Namibians then. Before the country became independent in 1990, there were some schools, often Lutheran, which focused on academics, but they were few and expensive.  The educations system has advanced in the last 23 years, but even now, much of the education focuses on rote repetition, Weiss noted.

Weiss, and the PLU students who teach in Namibia, must work to honor the culture and traditions, while still moving the learning process forward in the schools. And learning to adapt – sometimes on the spot – with different cultural norms. Such as corporeal punishment.

“Many Namibians are accustomed to being hit,” Weiss said.  “It isn’t legal, but it just happens. When the kids are misbehaving, they’ll tell a PLU teacher “just beat him, Miss.”’ Of course that’s not an option for the PLU students, who find different ways to keep order in the classroom that don’t involve fists.

One student, recalled, adapted part of the culture – the “Big Five” referring to the hardest animals to hunt – to her classroom, Weiss said. “Her “Big Five” provided a clear countdown of being ready for work, voices off, eyes forward, etc,” Weiss said.

Another student showed cultural competence by not insisting that students look at her when she was correcting them – it’s a sign of disrespect in Namibian culture to stare at an elder when being reprimanded, Weiss noted.

“It is gratifying to be part of a different culture and work alongside people who are forever hopeful and deeply committed to empowering people who have lived through oppression,” she said of her Namibian counterparts.

Weiss will be returning to Namibia next year, again under the Fulbright program, to help develop a national educational program that will assist second-year teachers in that country. The responsibility, she laughed, “sort of has me freaked out.” But she has since wrapped her mind around the challenge, and it looking forward to the task.

Her advice for the new teachers in Alaska, Namibia, or for the many other PLU educators who will be entering the classrooms in the coming year?

Weiss pauses for a moment. Then the ideas come in quick succession.

Treat all kids as highly capable, they will rise to your expectations. Champion innovative thinking and look beyond the standardized test scores. Get kids to think.

And one last thing, she adds.

“All relationships are important. Never lose sight of that. Never give up. You might be the last person that kid will ever know as someone who never gave up on them.”