The art of romance writing 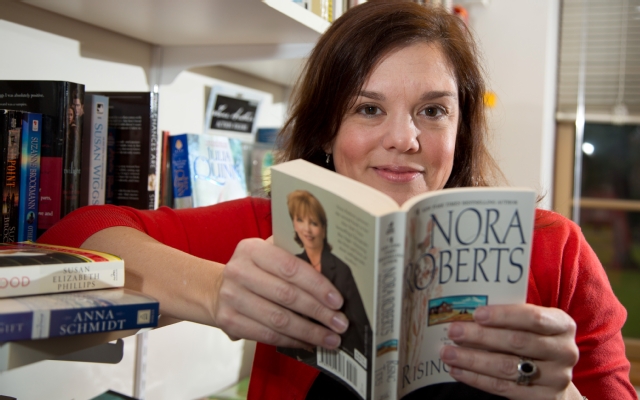 Professor Joanna Gregson did research into writers of romance novels and found herself intrigued and surprised. (John Froschauer, Photographer)

The box came from a friend and fellow sociology professor with whom Gregson attended graduate school. It was in response to a conversation the two had a few days earlier: Have you ever read a romance novel?

Gregson hadn’t. And she would fully admit that she was like many other people: She assumed romance novels were easy reads, brainless formulaic pop.

Then, the box of novels arrived. She read one. And a research topic was born.

As a sociologist who specialized in sex and gender issues, the subject seemed perfect. And as a field researcher – someone who conducts research on location, first-hand – Gregson knew she had to dive in, head first.

So she and Lois joined the 10,000-member strong Romance Writers of America and began attending monthly meetings in Seattle and annual nationwide conventions, where, as you might expect from a group comprised almost exclusively of women, they were warmly welcomed into the fold.

When Gregson started the project, she assumed the subject matter would be squarely in her sex-and-gender wheelhouse. Essentially, she’d find out: Who are these women who write these novels? And how do they decide to create the characters that they do? What she found, however, is that romance authors aren’t thinking about gender archetypes. They want to tell a compelling story, just like any author.

Gregson and Lois recently presented her findings at the Romance Writers of America national conference in Atlanta this summer, and they received an enthusiastic reception. Their research has been mentioned on countless author blogs and Twitter feeds, featured in podcasts, and they have been asked to write guest blogs for Random House and USA Today. The pair also have a Facebook page and Twitter feed to update fans on their research.

Gregson finds most interesting the idea of the stigmas associated with these novels. After all, she admits even she had her own stereotypes before she read them. She knows her misperceptions are hardly unique.

“We’ve interviewed New York Times bestselling romance authors who still get told, ‘That is so great you are successful at this, maybe someday you’ll write a real book,’” Gregson said.