Free To Fly At Last 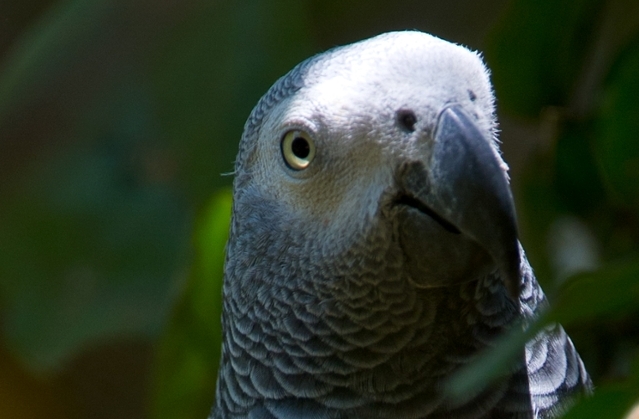 So much for the photo opp.

Professor Charles Bergman had been camouflaged in a blind for hours, waiting for a flock of 17 African Grey Parrots to emerge from an enclosure at Uganda’s Ngamba Island Chimpanzee Sanctuary, where they had lived the last four months.

While the heat was tolerable—that morning, dawn had glazed Uganda’s savannah with a pink-orange patina, 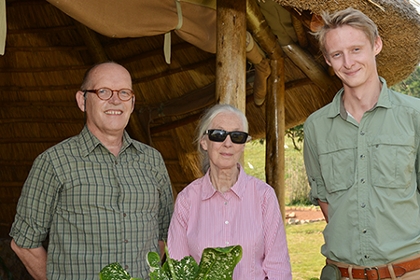 it was the bugs that bothered Bergman the most. Those and the fact that the parrots—the star attraction for iconic wildlife advocate Jane Goodall, the Ugandan press and leaders of the World Parrot Trust—didn’t seem at all interested in making an appearance.

With the pull of a rope, Goodall released the enclosure’s trap door, offering the birds the freedom they had been denied for three years.

For the love of birds

“Let’s face it; she (Goodall) attracts a crowd,” Bergman chuckles as he reviews photos from the month-long trip he and PLU English major Nevis Granum ’14 took to Africa this summer, thanks to funding from Wang Center and Kelmer Roe research grants.

http://www.youtube.com/watch?v=qPIOzIO5X4g
For Bergman, the parrot release capped a passionate two-decade interest in the species. The English professor and photographer wrote a cover story for Audubon Magazine in 1991 after going undercover for the U.S. Customs Service and the U.S. Fish and Wildlife Service: Posing as a pet-shop owner wishing to buy illegally acquired parrots, he was offered 26 of them stuffed in cardboard boxes and paper bags. 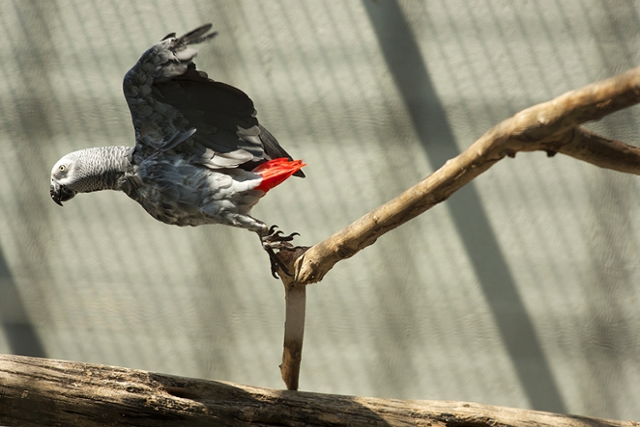 After three years in captivity, an African Grey Parrot flies to freedom. (Photo by Nevis Granum ’14)

Ten years later, Bergman wrote a cover story for Smithsonian magazine on the illegal wildlife trade in Latin America. He plans to use research from this latest trip to write another Smithsonian story, on gorillas and the recovery of the species that makes its home on the lush mountain slopes of Rwanda, Uganda and the Democratic Republic of the Congo. In the meantime, Slate.com has accepted his piece on parrots, which was published this fall..“Our love for parrots has proved so toxic, we cage them for the very thing we love about them: their intelligence,” Bergman says. “I’m especially interested now in the connections between the ‘legal trade’ and the illegal trade, which these 17 (released) parrots illustrate—they were laundered birds.”

Bergman and Granum initially met on a J-term trip to Antarctica. Bergman quickly became Granum’s mentor and friend, as they both shared a love of the outdoors, photography and animals.

Since then, Granum has changed his major to English and plans to use his passion for wildlife photography to bring awareness to the plight of our world’s animals.

“When I looked into the eyes of a parrot, it was quickly apparent that a highly intelligent, thinking, charismatic being was looking back,” he says. After his experience in Africa, Granum feels strongly that parrots should not live in cages, but in their own wild environment. Granum recently wrote about his experiences in The News Tribune.

“Imagine a creature this intelligent, this charismatic, this social, ripped from the rainforest and away from their flocks, and isolated in a small cage,” he says.

Which brings us back to the rescued parrots—who refused to leave the enclosure.

“So we expect that we will lift the hatch, and they will fly to freedom,” Bergman continues. “But not one of the birds even peeks out. The birds are so suspicious—rightly so; they don’t trust us.”

The press left. Goodall left. Bergman and Granum listened to the birds whistling to each other.

“I think they were saying, ‘We know you are still there,”’ Bergman says.

“I don’t think they realized how free they really were,” Bergman says.

“These parrots had been in dismal captivity for the past three years. This parrot on the branch,” says Granum, pointing to a photo of a parrot near the enclosure, “flew out as the sun was just beginning to set. Imagine what it is seeing: the freedom to spread its wings again in the beautiful world it once knew.”

In all, about 2 million African Greys have been shipped out of Africa in the last four decades—many illegally—to feed the world demand for pet birds.

African Greys are not the most striking of the parrot species—slate grey with a few red flecks and a red tail—but they might be the smartest: They have the intelligence of a 4-year-old child and can live up to 50 years, Bergman notes.

And while Goodall is known for her groundbreaking research with chimpanzees, she also has an interest in—and strong opinions about—parrots, specifically the African Grey.

From the Jane Goodall Institute website, she notes, “Because they are so smart, people want to possess them. For me, the sight of a parrot living alone, living in a cage, deprived of flight, miserably bored, breaks my heart. And the parrot’s, too, perhaps.”

Bergman was casting about on a topic to engage the soft-spoken Goodall over dinner one night at the sanctuary when he decided to ask the 79-year-old primatologist whether she liked parrots. The answer, of course, was yes. She had wanted one as a child after seeing Dr. Dolittle and its macaw, Polynesia. Around the campfire, Goodall told stories of the parrots’ intelligence, describing an African Grey Parrot in New York City with a vocabulary of 1,600 words—not far behind the average working vocabulary of most people.

As for the fate of the 17 birds that finally—literally—flew the coop: Researchers are still tracking them and studying whether they eventually will form their own flock or join a nearby wild one.

Even a month later, Bergman says, a few of the now-free African Greys are still hanging around the sanctuary, enjoying the abundant food.