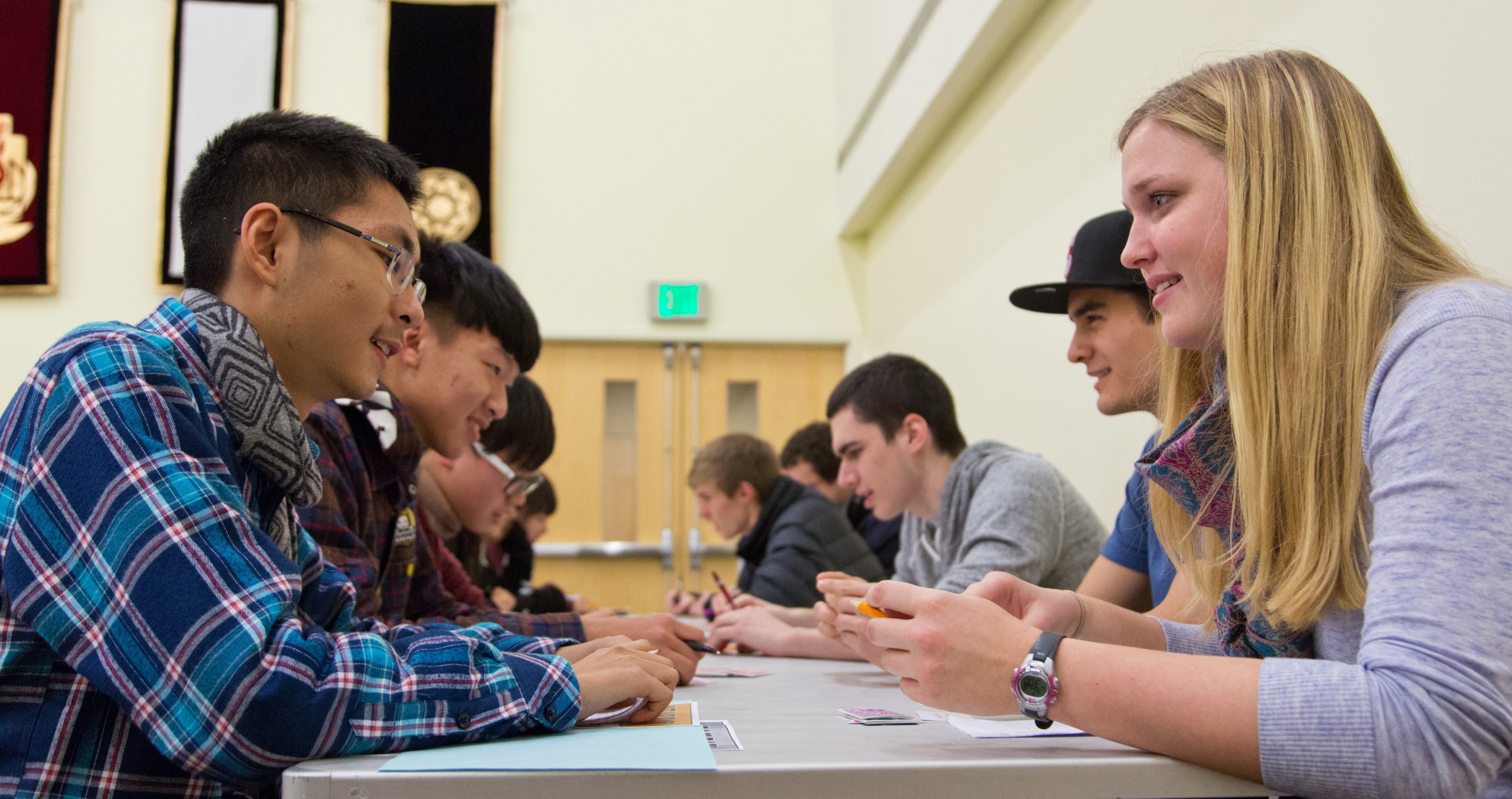 Chinese students pair up with Lutes in a “speed-dating” exercise at PLU on Jan. 30 designed to discover cultural intersections. (Photo: John Froschauer / PLU)

By James Olson ’14
Students from six Beijing high schools congregated in the Anderson University Center on Jan. 30 to participate in a cultural exchange that looked a lot like a speed-dating session—on purpose.

The students, who were visiting Pacific Lutheran University as part of a longer tour of U.S. schools hosted by Chinese “agent” EduKeys, sat at tables arranged in a rectangle, with all the Beijing students facing outward, expectantly. After a few key talks—including one from Professor David Huelsbeck on his time spent studying the Makah tribe of Neah Bay—a mass of PLU students was ushered in and seated across from the waiting students.

During the exercise, the Lutes and the Chinese students exchanged ideas about how their cultures intersect, using inquisitive prompts from a card game called The Ungame: from, “How do you feel when someone calls you names? How do you react?” to, “Do your friends ever try to talk you into doing things that are wrong?”

Then they moved on to another student, and another question.

“I played Nirvana on my DVD player,” said event organizer and host Professor Mahlon Meyer. “When they heard the music, they stood up and moved. Then when I stopped the music, they quickly found a place to sit down. They all really had a good time. This was the most fun I have ever had in an educational event.” 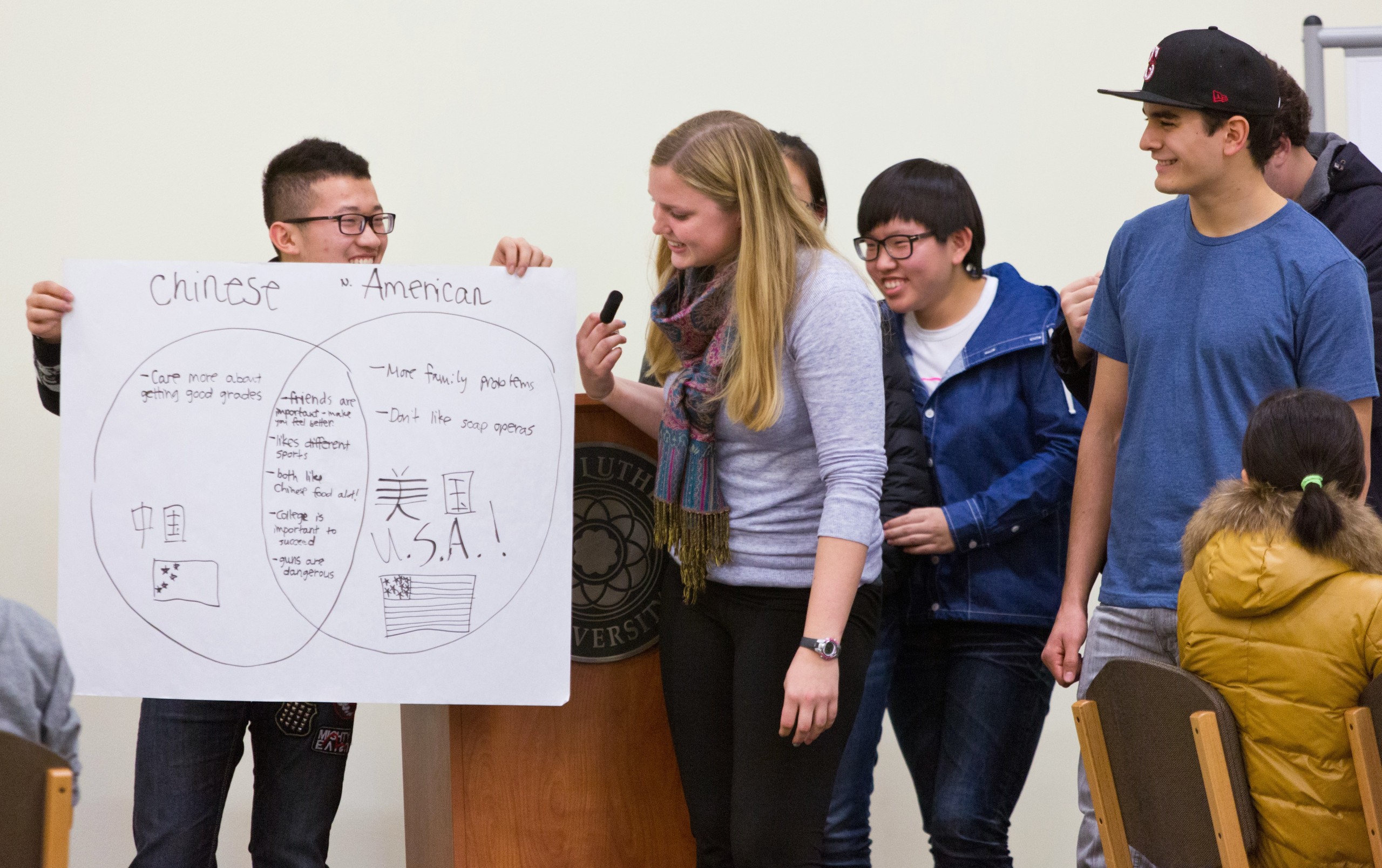 Andrew Tinker, a PLU student at the event, said, “Having the students visit from China was an eye-opening, multicultural experience. It really drove home that even small, personal actions can be used to shape our sense of who we are. Though we share a lot of the same worries and concerns with the students who visited from China, there were still remarkable differences in our day-to-day lives. I think that demonstrates the breadth of the human experience.”

The idea for the activity—and its speed-dating format—originated as a way to diversify the experiences of the students’ tours. Generally, students brought by such agencies to U.S. schools are seated in lecture halls and spoken to en masse. The problem with this, Meyer said, is that it disallows the visiting students, many of whom are only children with strong familial ties, a real feel for the type of students they could end up with at college.

At the event, the students faced each other in pairs, communicating in English. “The questions were not too hard, and the Chinese high-school students spoke pretty good English,” Meyer said. “When they didn’t understand a question, we told them to ask their American counterparts to explain it using different words. It worked really well.”

This was the first time a Chinese agency has brought a group of high schoolers to PLU. Usually such students, who read U.S. News and World Report, are interested in internationally known schools such as Harvard or Stanford and tend to avoid small liberal-arts universities. But there’s a problem with that narrow focus, Meyer said: Often, the education students receive from giant universities lacks the critical-thinking skills and interpersonal savvy offered at PLU—a more-integrative experience exhibited, in part, by the speed-dating exercise.

It seems to have paid off. “Both the Chinese and the PLU students told me afterward they thought it was really fun,” Meyer said, and the visitors’ director of teacher recruitment and program coordinator said they enjoyed the PLU activity more than the lecture they heard at a much larger university.