Choosing to Make a Difference 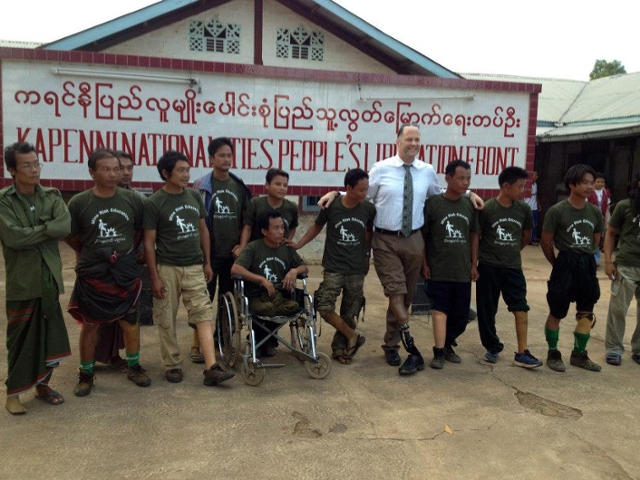 On a visit to a U.S.-funded mine-risk education seminar in Kayah State, Jerry White stands with fellow landmine survivors. U.S.-supported mine-risk education in Burma can serve as a platform to build trust between these armed groups, the military and the Burmese government. Photo courtesy of the U.S. State Department.

Turning Tragedy into a Sense of Mission: Nobel Peace Prize Winner Talks at PLU on Facing and Overcoming Obstacles

Jerry White remembers sitting in his wheelchair in an Israeli hospital, looking at his nurse.

When he found her, she just stared back, without sympathy, making no effort to help the 20-year-old American who had just had his right leg blown off by a landmine the week before.

“I expected them to help me, but the nurses just stared back,” remembers White, now working for the U.S. State Department as a Deputy Assistant Secretary of the Bureau of Conflict and Stabilization. “They told me to get my own lunch. The cafeteria was ‘that way.’”

After meeting with local veterans on Feb. 21, Jerry White will give a free public talk as part of the 2014 Wang Center Symposium at 7:30 p.m. in the Karen Hille Phillips Center for the Performing Arts. White is Deputy Assistant Secretary of the Bureau of Conflict and Stabilization Operations at the U.S.  Department of State, co-recipient of 1997 Nobel Peace Prize for the International Campaign to Ban Landmines, and author of I Will Not Be Broken.
such as this that we all carry around with us, he noted recently. It’s a date, a time when life changes, and it’s up to us to decide how to respond to the event and make critical choices that will shape our future. One individual, White noted, “can make changes that have ripple effects around the world,” if there is enough determination behind that passion to make a change for the better.

White will reflect on his journey, as well as his current job, which entails reaching out to leaders – both religious and secular – in the world’s conflict areas, when he comes to Pacific Lutheran University on Feb. 21 as one of the keynote speakers of the Wang Center Symposium: Legacies of the Shoah.

White specializes in building cross-border coalitions and history-making campaigns, three of which led to major international treaties: the U.N. Convention on the Rights of Persons with Disabilities, the Cluster Munitions Treaty and the Mine Ban Treaty.

In his current job, he is responsible for the Burma and Libya portfolios, as well as three new offices: policy, partnerships and training. He co-chairs the State Department’s sub-working group on religion and conflict mitigation. For White, the choice was to not lament or slip into depression, but eventually set his life on a course that would reach out to others who experienced similar disasters. His passion for eradicating landmines eventually led to sharing the 1997 Nobel Peace Prize with the group of individuals on International Campaign to Ban Landmines. His 1997 trip to Bosnia-Herzegovina with Diana, Princess of Wales, was the event he credits with putting the spotlight on the plight of hundreds of thousands of victims wounded by mines worldwide.

White remembers the former princess, who died a year after he met her, as a woman of natural charisma and keen intuition and intelligence.

“It was crazy to be hit in the face with that charismatic energy that she had,” he remembered. “She could come into a room and diagnose from the people there who was in the most pain. Her emotional and empathic intelligence was off the charts.”

She also had quite a sense of humor. When reviewing their “dates” after a particularly somber meeting with landmine victims, White said that Diana at first quipped that hers was July, 29 1981, the date she married Prince Charles.

As for his work against landmines, it’s not done. There are between 60 to 80 million still in the world—no one really knows for sure, he said.  White obviously feels he’s just where he’s supposed to be right now – he had planned, before taking his current job, to become an academic in Cambridge. Life had other plans to put him in the right place, in the right job.

As for his advice to students who may be in the audience on Feb. 21?

Life will give you a date. Eventually. Inevitably. Choose life, and choose to make a difference because of it, he said.

“Victimhood is a disease you can slip into, “he said. “Use the crises in your life, big and small, to begin training to become resilient.

“Whether it’s before or after, transitions are quite formative,” White said. “When you ask people about the before and after moment, if it’s an international student crowd, quite a few will raise their hand. If it’s more of a preppy town, less hands will be raised. But your time will come.”