During the Powell-Heller Holocaust Conference, a educational display about the Danish Resistance and rescue will be available or public viewing. Prepared by the Danish Resistance Museum in Copenhagen, the exhibit tells the story of the effort by Danes to rescue Jews from the threat of German deportation. In October 1943, word leaked that Germany was planning to round up and deport the Jews of Denmark. Approximately 8,000 of those Jews, well over 90 percent, were transported by small boats to nearby Sweden. In terms of percentages, this represents the most successful rescue of Jews during the Holocaust. The exhibit will be in Pacific Lutheran University’s Scandinavian Cultural Center. 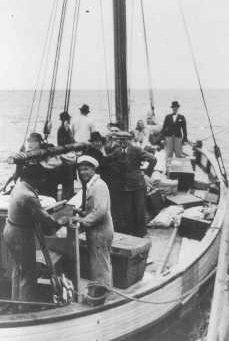 Photo courtesy of US Holocaust Museum.