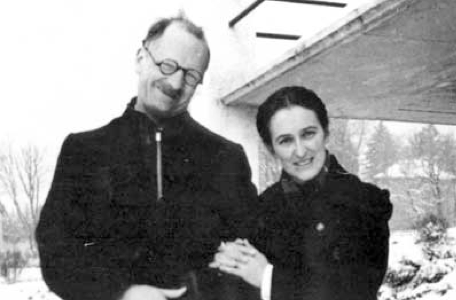 Hiding in Plain Sight: The Story of Rescue in Le Chambon, France

It all started in the area of Le Chambon-sur-Lignon, France, when a lone, and unexpected, Jewish refugee showed up in 1938, a Latin teacher from Vienna. Word spread. Others came.

The Nazi occupation grew in power and the collaborative Vichy government tightened its grip, remembers Nelly Trocmé Hewett, 86, who will serve as a panelist during the Powell-Heller Holocaust Education Conference this week.

Over the war years, between 3,500 and 5,000 refugees, mostly Jews, came through the Plateau Vivarais-Lignon, where Le Chambon is located. The south-central France plateau is home to 12 mostly Protestant villages. Hewett’s parents, Pastor André Trocmé, and his wife Magda, were among the leaders of the rescue operations.

The plateau was an ideal hiding place for a number of reasons, Hewett said. It is geographically isolated, with many woods, remote farms, no industry and poor transportation.

Nelly Trocme Hewett grew up in Le Chambon, France, a community which sheltered up to 5,000 Jewish refugees in WWII.

Its French Protestant community was wired to help those in need, given that their ancestors had been persecuted during the 17th and 18th centuries in the largely Catholic French nation. Without questions, they made an unspoken commitment to keeping refugees safe, she said. And, as a summer vacation destination, the plateau offers plenty of small hotels, apartments and boarding houses in which to house large numbers of people. While there were many safe havens in France overall, none was as large as the one on the Plateau Vivarais-Lignon, which is why it has become a story that symbolizes the rescue efforts of an entire nation. Some refugees stayed only a few days until they could find another safe haven in other parts of France, or leave the country for Switzerland or the United States. Others stayed until the end of the war, said Hewett, who was a teenager at the time of the rescues.
Hewett describes her parents as strong and dedicated people who had amazing stories even before the war. André Trocmé was born to a strict Calvinist father and a German Lutheran mother, and became a Protestant minister and dedicated pacifist. Because he was a conscientious objector, he was marginalized by the leaders of the French Protestant church.

Magda Grilli di Cortona was Italian on her father’s side, Russian on her mother’s. She was a descendant of one of the Decembrists, the early 19th century social justice revolutionaries in Russia. Hewett remembers her mother as a passionate idealist and natural social worker.

André and Magda met in the mid-1920s while studying in New York City, he at Union Theological Seminary and she at the New York School of Social Work. Six weeks after meeting, they were engaged. “They were two people from different places with the same ideas about serving humanity and doing something useful on this earth,” Hewett said.

Following eight years of ministering in two parishes in northern France, Le Chambon was the only parish that would accept Trocmé as its pastor. “The church elders didn’t realize that the war was coming and that he would be the right man in the right place at the right time,” Hewett said.

The French Vichy police and later the Germans were aware of what was happening on the plateau but most of their round-ups failed because the refugees were able to hide in the woods and in the barns, Hewett said. Three village leaders, including Trocmé, were briefly incarcerated in a French internment camp. In June 1943, 18 people were deported following a raid by the Gestapo, and most of them disappeared. Even then, nothing could discourage the residents of the plateau from harboring refugees throughout the rest of the war years.

“At one point, my dad was asked by the Vichy police to give the names of the Jews that he knew were living in the area,” Hewett said. “Dad responded, ’We don’t know what a Jew is. We only know human beings.’”

After the war, Hewett came to the United States as an au pair and then graduated from Earlham College in Richmond, IN. She married an American, raised three children in Minneapolis, MN, and taught and tutored French for nearly 40 years. She currently is retired in St. Paul and is deeply involved in ensuring the integrity of the history of the Plateau Vivarais-Lignon during WWII.