MESA Day at PLU: A Bridge to Success 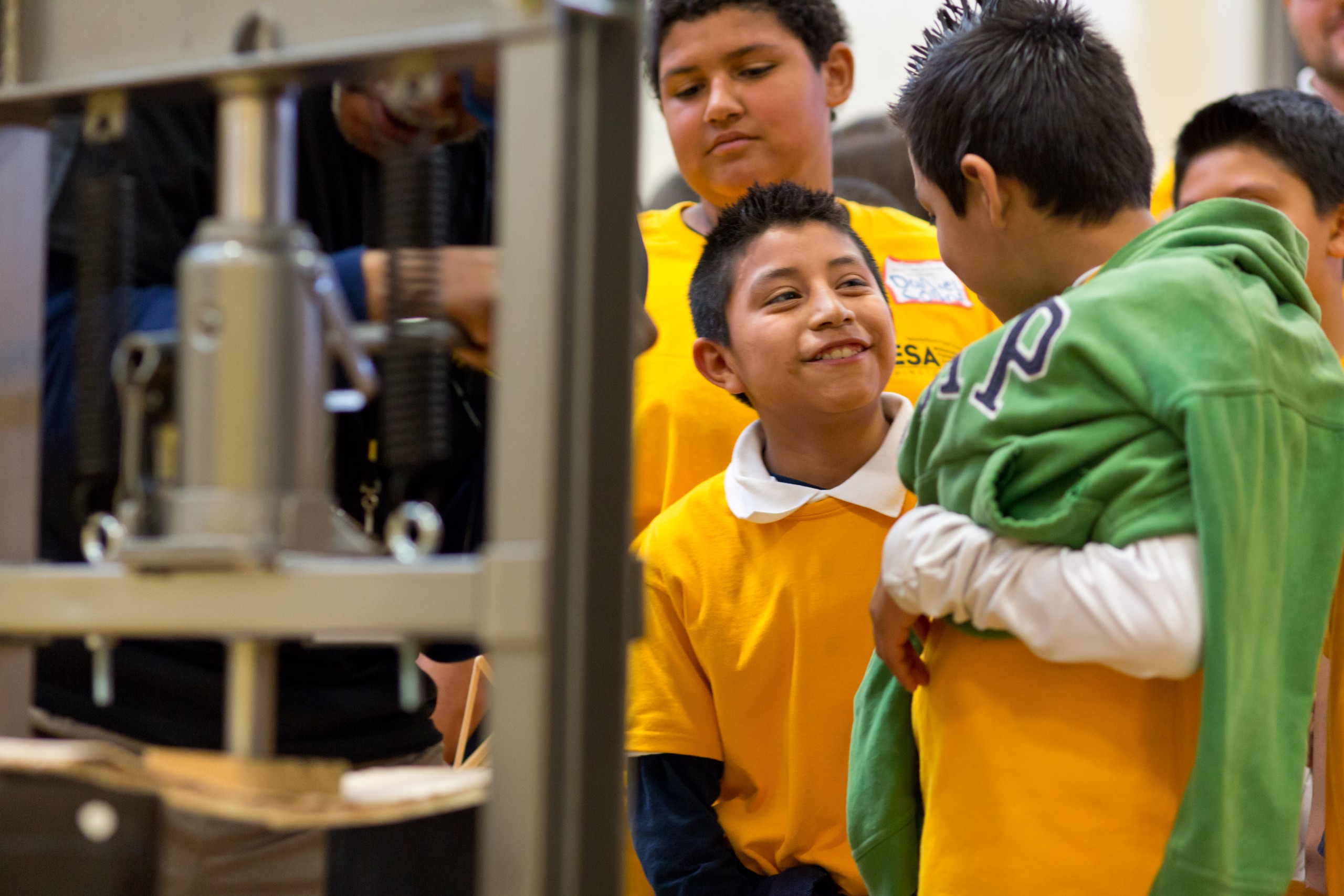 It is strategically reinforced—gobs of glue form extra-strong bonds where the sticks meet—and Denner has high hopes it will withstand the 12-ton shop press waiting at the end of a very long line.

Denner and Antonio are in Betsy Constantine’s fifth-grade class at Sheridan Elementary School in Tacoma. They—and about 498 other K-12 students from 22 schools—came to Pacific Lutheran University on March 25 to compete in the Tacoma/South Puget Sound MESA Program’s 14th annual MESA Day, designed to expose students to a variety of STEM careers, fields and subjects—and to excite them about math and science.

MESA stands for Mathematics Engineering Science Achievement, and MESA Day tests all of those skills through fun challenges such as building stick bridges, designing and flying gliders, creating prosthetic arms and building energy-generating windmills from straws and masking tape. Students have been working on these projects throughout the year—in class and after school—and then they bring them, and their own high hopes, to PLU each spring. It’s a major event, filling both Olson Auditorium and Memorial Gymnasium, and about 25 PLU staff members—from the Division of Natural Sciences and other departments—volunteer each year, along with members of the community.

“This is the Olympics of MESA,” says J.R. Nobles, director of Tacoma/South Puget Sound MESA at PLU. “This is what our students have worked for all year long, to show off everything they’ve learned.”

Denner has a lot of learning to show off—although he definitely is not the showy type. Quiet and reserved, he answers questions politely and concisely—and the fact that he understands every word of every question impresses his teacher greatly.

Denner and his family came to Tacoma two years ago from Mexico, and he spoke no English, Constantine says. So Constantine, who taught Denner in fourth grade, too, translated his lessons into Spanish. But only for a while.

“This year he said, ‘You don’t need to translate anymore,’” Constantine says. In addition to his quick English skills, Denner already has passed the state math assessment and excels in science, too.

“He wants to go to high school and college and find a job to help his mom,” Constantine says.

But for now, he just wants that stick bridge to hold up. In the packed gym, Denner meets up with Antonio behind dozens of students with dozens of bridges. At the front of the line, volunteers crank two hydraulic presses that bear down on each bridge and measure the weight at which each gives way.

Denner and Antonio peek around taller students to watch their competition and predict how much each bridge will hold. Rumor has it one withstood 300 pounds of pressure. The bridge right before Denner and Antonio breaks at 20.

Finally, Denner sees light at the end of the bridge tunnel: “We’re next!” he says.

Volunteer bridge-busters Michael Hale, who works for the City of Tacoma, and Francine Artis, a MESA board member, line up the boys’ bridge. Artis asks whether it’s strong and flexes her arms for emphasis.

Denner can only nod.

When Hale says, “Two hundred! I don’t even weigh that much,” people start to take notice. Constantine whispers, “Oh, my gosh.”

Ultimately, Denner and Antonio’s bridge holds 270 pounds—and, unlike many before it, it does not break; it merely cracks. People clap and cheer. Constantine launches a high-five.

As Denner heads to his next challenge, Constantine, who was selected MESA’s 2013-14 Teacher of the Year, shares a little more of his backstory: Denner and his family lived in a garage for several months when they first came to Tacoma. From there, they moved to a trailer with no running water. Just two weeks ago the family moved into an apartment.

“Denner’s very responsible,” Constantine says. “He takes care of his sister in the mornings and does homework with her in the afternoons while Mom’s at work.

At the closing ceremony, Denner and Antonio are awarded second-place ribbons for their Popsicle-stick bridge. Only one entry was stronger.