Take Back the Night at PLU

Take Back the Night at PLU 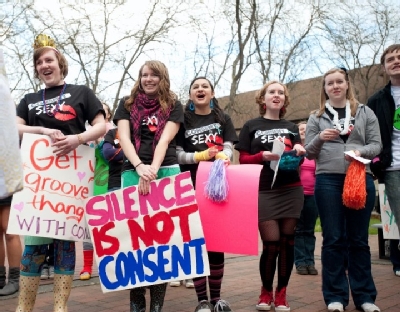 Pacific Lutheran University’s Women Center hosts the annual Take Back the Night march and rally, part of an international campaign to raise awareness about sexual assault, April 24 in Red Square.

The event invites people to speak up and speak out about ending violence.

Take Back the Night

Take Back the Night has been an internationally recognized event since 1976, and for the past 10 years PLU has held its own event during April, Sexual Assault Awareness Month, to show support and to emphasize that PLU does not condone any form of violence.

“We want to bring so much attention to the event this year because we have made great strides to gain partners,” said Kelsey Greer ’14, who works at the Women’s Center.

“These new partnerships are making way for campuswide conversations to begin around the issue of sexual violence and why it is not only important to bring awareness to the issue, but ultimately work together to end it,” Greer said.

“This is an important issue that everyone should be concerned about,” Greer said.