The Intersection of Diversity, Justice and Sustainability

The Intersection of Diversity, Justice and Sustainability 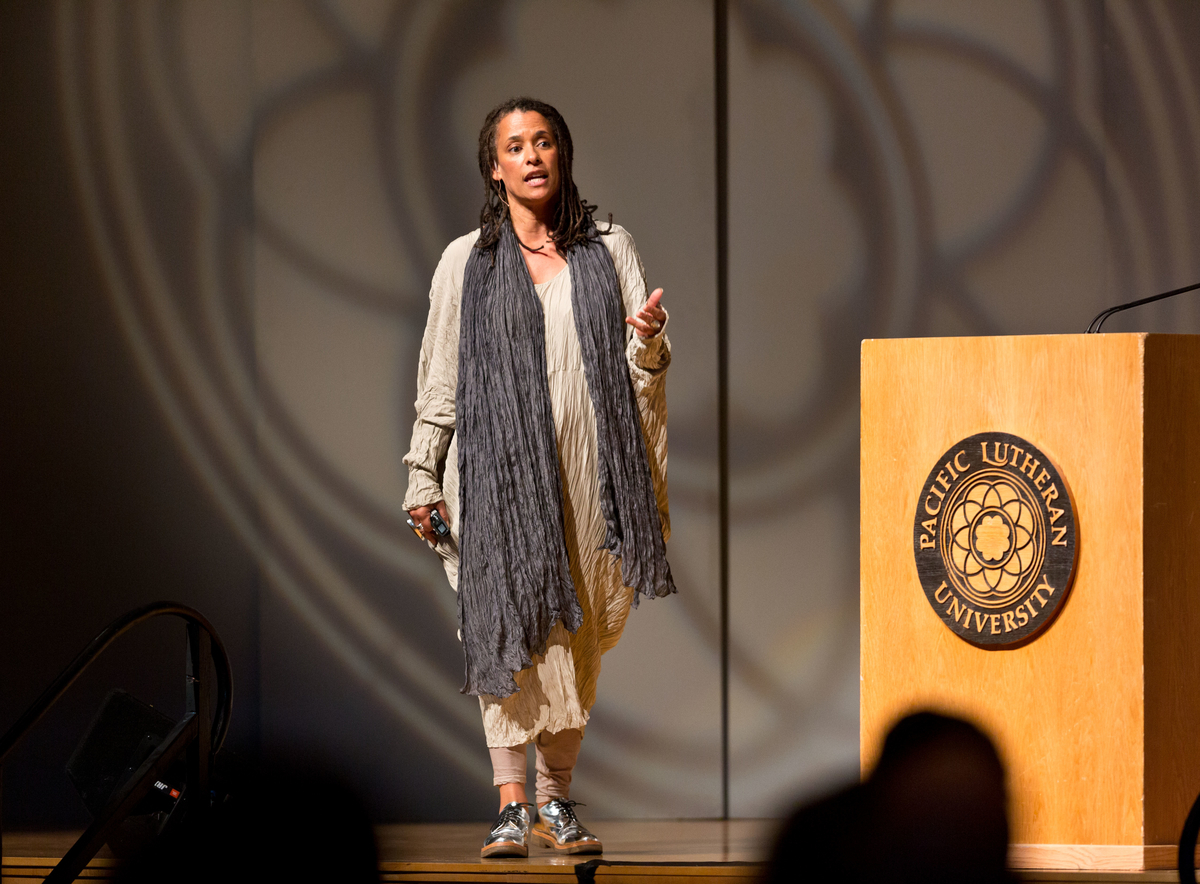 But Finney’s speech was entirely her own: intensely personal, purposely provocative—and encouragingly challenging.

Finney, Assistant Professor of Environmental Science, Policy and Management at the University of California-Berkeley and author of Black Faces White Spaces, addressed PLU faculty, staff and administration at University Conference 2014.

Finney said she is the first in her family to earn a Ph.D.—and the only African-American faculty member on tenure track in UC-B’s College of Natural Resources.

Following a State of the University address by Pacific Lutheran University President Thomas W. Krise, Finney explored the intersection of diversity, justice and sustainability (“DJS” at PLU), three pillars vital to PLU’s mission of educating students for lives of thoughtful inquiry, service, leadership and care—for other people, for their communities and for the Earth. The key to the successful convergence of those ideals, Finney said, is that we all have to talk about them—really talk about them.“I’m thankful we’re actually making a conscious decision to talk about DJS,” Finney said. “But don’t think for a second we all define DJS the same.”

Finney’s personal exploration of DJS began as a child, when her parents worked as caretakers on a vast New York estate, and her family lived in its garden cottage.

“The first time I had a sense of the color of my skin was when I was 9,” Finney said. “I was walking home from school with my little afro, highly unimpressive, and a cop stopped me and wanted to know where I was going. He said, ‘Do you work there?’ and I said, ‘No. I live there.’”

Later, Finney said, she realized most people of color who lived—and worked—on land, like her parents, were invisible. “They never call themselves environmentalists,” she said. “So when we’re talking about sustainability, what is it we’re trying to sustain? We can’t afford to sustain an environmental narrative where my parents and others are ignored.”

When Finney started collecting such previously ignored narratives for her dissertation (which, 10 years later, became her book), it helped her see how diversity, justice and sustainability come together—and it motivated her to tell those stories.

Finney cited black environmentalist John Francis, who, after a 1970s oil spill, walked all across the U.S. and Latin America for 22 years, eventually becoming an author and architect of U.S. oil-spill policy; creator-under-resilience Brenda Palms Barber, who trained ex-convicts in Chicago to make and sell urban honey; and Florida’s first black millionaire, Abraham Lincoln Lewis, who founded American Beach at a time when African Americans were not allowed to swim at most beaches in Jacksonville.

Few in the audience had heard of these pioneers—which precisely illuminates yet another DSJ challenge.

“I always ask, ‘Do I see myself, and how? Is it positive, stereotypical, ignored?’” Finney said. “Always ask, ‘Who are you NOT seeing?’ We all want to belong, be fully seen.”

Clearly, even more challenges remain—in educational institutions; in Ferguson, Mo.; in our own perspectives.

“Those ideas that certain people don’t do certain things—leave that outside the door,” Finney said.

“It’s great when an institution realizes it has to create a space for diversity. One person cannot do it alone. Diversity cannot be something you add on. It’s all about the process, your commitment to the process. There’s no shortcut. You have to do the work of transformation. We all need to lean in and engage.”