TACOMA, Wash. (Feb. 25, 2015)—When my advisor first emailed me over J-Term about an opportunity to go to the Amazon campus in Seattle, I wasn’t sure what that entailed. I assumed we would get a tour, meet some employees and listen to a few presentations from Amazon leaders. As a senior about to graduate from PLU, I knew this kind of opportunity wouldn’t come up again in the three short months I have left at PLU.

So I took a shot in the dark and applied to Amazon’s first annual Pacific Northwest Career Day Conference through PLU’s very own Career Connections. I sent in my resume and explained why I wanted to attend.

At the beginning of February, Kate Schneider, PLU Director of Employer Relations, emailed me saying I was one of the students selected to go to Amazon. 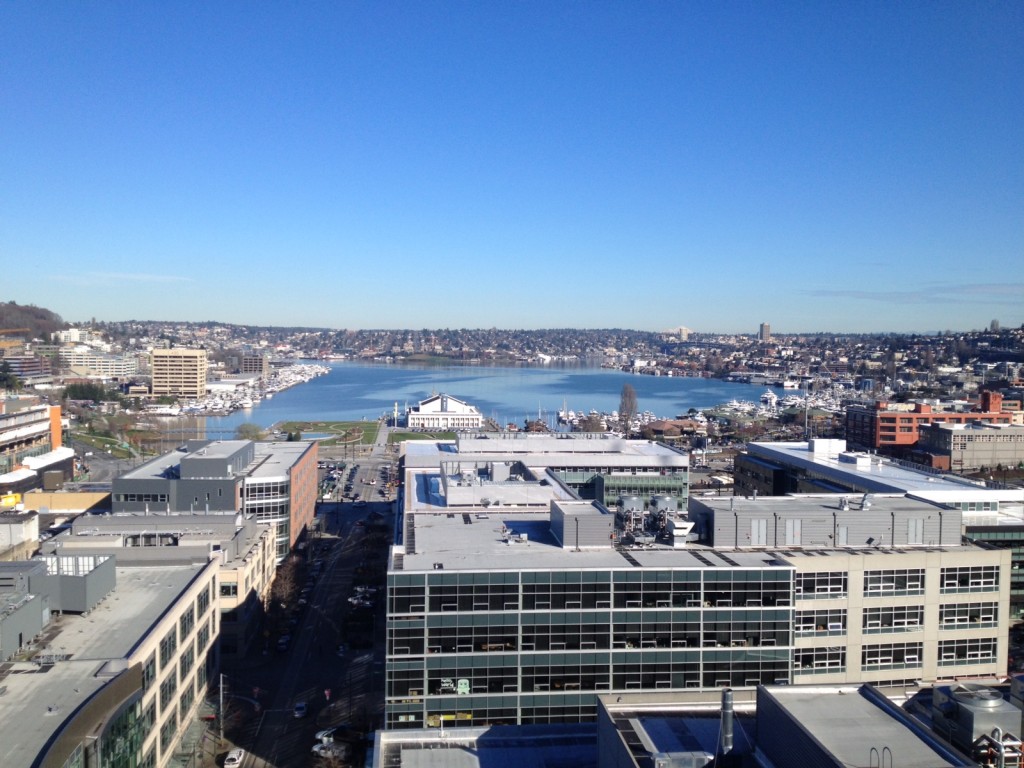 PLU students got a great view of Seattle’s Lake Union from the top of one of Amazon’s buildings. (Photo: Amanda Brasgalla ’15)

I was really excited, and shortly after, we were contacted by an Amazon recruiter who shared additional information and prepared us for the event.

On the morning of Feb. 23, we left campus bright and early, at 7 a.m. As soon as we arrived at Amazon, we went to the lobby, where we each got a badge, nametag and the chance to grab anything we wanted from the coffee bar (every college student’s dream at 8 a.m. on a Monday).

And then, once we were escorted upstairs, we were provided with breakfast.

Our first speaker of the day was Dave Zimmer, Vice President of Kindle Device Sales. He laid out the 14 Amazon Leadership Principles that guide the company and its day-to-day work.

We then went on a tour of the Amazon campus. We broke up into several groups and spread out. It was really interesting to see that the Amazon buildings have no clear signage or branding. There are many buildings spread across several blocks that all look different and have nothing cohesive about them. With a public relations and advertising background, this surprised me. We did get a really awesome view of Lake Union from the top of one of the buildings. It was a gorgeous February morning.

After the tour and partner resume reviews, Vice President of Global Talent and Acquisition Susan Harker took our questions about applying for a job; we learned tips and tricks to help us stand out and improve the way we sell ourselves to future employers.

We ate lunch, then had an afternoon packed with case studies. We were put into seven groups with students from various schools and given a typical scenario that would come up during an Amazon interview. We had time to work it out with our teams, discuss and then present to an Amazon employee.

The end of the day consisted of a Q&A panel with those who recently have been hired in the undergrad program about how we can get in on becoming an Amazonian.

I am grateful to Career Connections for giving PLU students the chance to attend, and for all the hard work and planning that went into this day. It was highly informative, and it’s comforting to know that PLU finds many doors for students to walk through.