TACOMA, Wash. (March 2, 2015)—Namibia Nine, the PLU-produced documentary depicting the journey of nine Namibian students back in their homeland after graduating from Pacific Lutheran University, premiered to a full house in the Karen Hille Phillips Center for the Performing Arts on Feb. 28.

The evening began with an introduction of the production team: Joanne Lisosky, professor of communication; Melannie Denise Cunningham, Director of Multicultural Recruitment in the PLU Office of Admission; Andrea Capere ’14; Princess Reese ’14; and Shunying Wang ’15. (Maurice Byrd ’14 also is a member of the team but was not present at the premiere.)

Cunningham, who also served as the evening’s emcee, was in traditional dress and excitedly introduced the first public showing of Namibia Nine.

The crowd was full of Lutes of all ages—current students and alumni filled the auditorium.

“It was really exciting to see the turnout to Namibia Nine and how all generations came together,” Melissa Munson ’18 said. “Old people and young people both came, and it was really cool to see the PLU community as a whole come together and support this project.”

The documentary, which lasted roughly an hour, told the story of nine Namibian students who attended PLU on scholarships from the Evangelical Lutheran Church, which supported Namibia’s fight for independence from South Africa post-apartheid.

Edwin Tjiramba ’94 was one of those Namibian students—and he also narrated the documentary.

“I was born in Namibia,” Tjiramba said in the film, “but my future began at PLU.”

The film showed the real-life power of a PLU education. Each of the nine now holds a position of leadership, and Cunningham related how, upon visiting the office of Pendapala Naanda ’92, his employees gushed to her about how special he was.

The nine recognized this, too. Eva-Liisa Shilamba Kafidi’92 mentioned the power of education in the film. “I know that, with an education, no one would oppress me,” she said.

One of the most well-received answers was from Tjiramba, in response to how he explained his unique PLU experience to others. He said that it wasn’t in how he told them, but how he related to them.

The way you can show how special your PLU experience is “in the way you live your life,” Tjiramba said.

In Other Namibian News ... 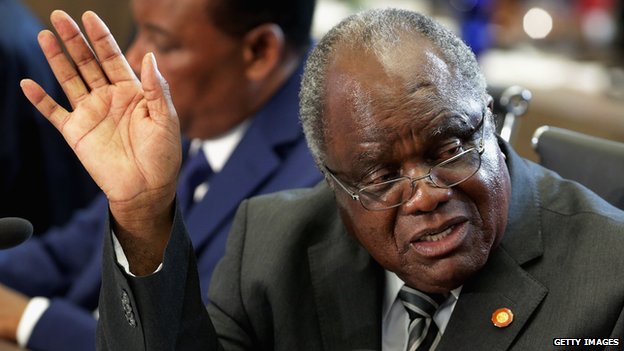 The $5 million award is given each year to an elected leader who governed well, raised living standards and then left office.

According to the report, the president hopes to use the prize to advance the objectives of the Hifikepunye Pohamba foundation, which helps students from disadvantaged backgrounds pursue higher education.