TACOMA, Wash. (Aug. 31, 2015)—Pacific Lutheran University has been closely connected to the Scandinavian world—and to the local Scandinavian community—since its founding by Norwegian Bjug Harstad in 1890.

These days, PLU’s Nordic roots are reflected across campus: in building names, artwork, Scandinavian Area Studies programs and especially in the Scandinavian Cultural Center (SCC), which in September takes those roots on the road and to the public.

In celebration of PLU’s 125th anniversary, the SCC has created a special exhibition called PLU at 125: Lutheran Education on the Frontier, which will be displayed at the internationally recognized Nordic Heritage Museum in Seattle’s Ballard neighborhood from Sept. 26 to Nov. 10. (The Lute community is invited to join PLU President Thomas W. Krise at an opening reception on Sept. 26)

It’s a huge opportunity—literally—to showcase PLU: The exhibition is anchored by five 5-by-8-foot canvas tapestries displaying photos from eras of PLU’s history. Each banner is accompanied by a plaque with information about each era, and separate panels chronicle the evolution of Lutheran education in the Pacific Northwest and at PLU specifically. The exhibition also includes maps, interactive media and selected historic items from PLU’s Archives.

SCC Director Elisabeth Ward has had a longtime working relationship with the Nordic Heritage Museum, which welcomed the opportunity to commemorate and celebrate PLU, since it’s seen as a cornerstone of the Scandinavian community in the Pacific Northwest.

Scandinavian immigrants to North American brought with them the core values of their home countries, including a deep appreciation for education, so establishing schools was a top priority for Nordic communities across the United States, Ward said.

The exhibition, then, chronicles how Lutheran educational ideals have been pushed to encompass a greater and greater segment of society, both at PLU and in Scandinavia. 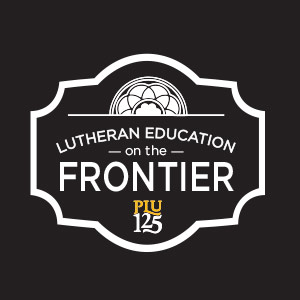 “Pacific Lutheran University evolved along with the emerging identity of the immigrants living on the western frontier,” Ward said. “It has continued to evolve since then in ways similar, but not identical, to Scandinavian trends and Lutheran religious and educational ideas.”