TACOMA, Wash. (September 22, 2015)—On Thursday, Oct. 8, members of the Pacific Lutheran University Speech and Debate team will partner with local policy experts to publicly debate the potential benefits and pitfalls of Proposition 1, an initiative being posed to Tacoma voters that, if approved, would raise the city’s minimum wage to $15.

PLU Director of Forensics Justin Eckstein hopes that Tacoma voters who have yet to come to a definitive conclusion regarding Proposition 1 will attend the debate at PLU.

“The advocating and doubting of standpoints, publicly, offers a mechanism for a community to determine the best course of action,” says Eckstein. “Tacoma citizens are invited to come hear the best reasons for and against an issue that we’ll be voting on a few weeks later.”

Eckstein, who also serves as a Clinical Assistant Professor of Communication at PLU, believes that pairing seasoned debaters with issue experts will create a dynamic synergy.

“These two debaters will bring with them excellent training, honed through many practices and college competitions,” he says. “The experts will bring a wealth of knowledge and practical experience with the debate topic.”

The 2015 installment of PLU’s annual Ruth Anderson Public Debate, the event represents an opportunity for students to engage with community leaders in a timely policy discussion — an opportunity that Eckstein believes is a rarity in local and national civics.

“Honestly, how often do you see college students given (public) space to advocate or doubt a position?” asks Eckstein.

“Students are too often relegated to the margins of the public sphere, as if they do not have something productive to add to the public discussion. We think that students have unique perspectives that enrich public debate.” 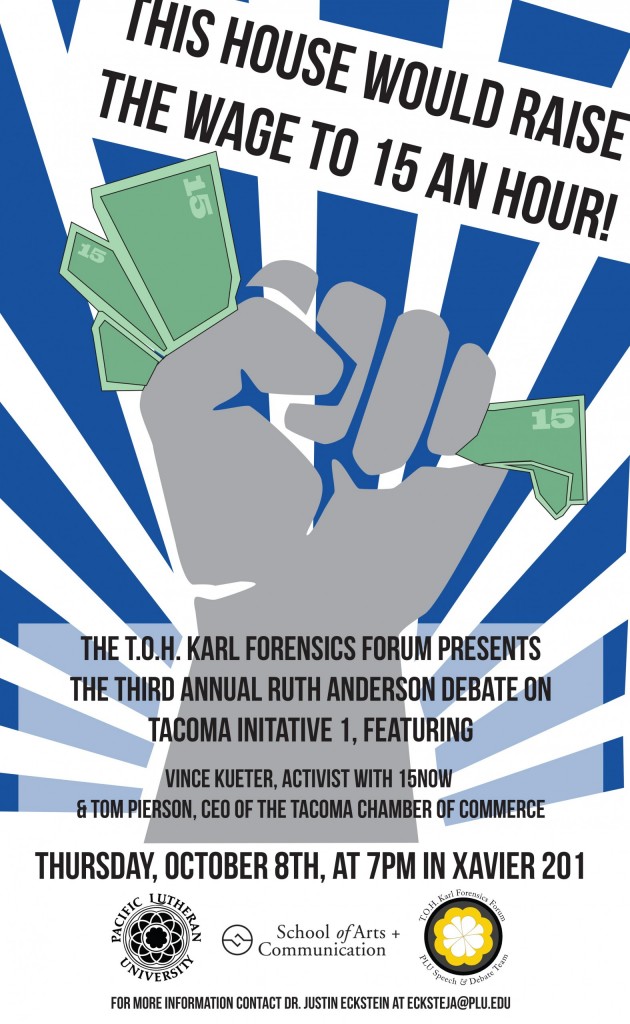 The debate will occur in three rounds. In the first round, each debater will give a seven-minute speech. The second round will be a 20-minute question-and-answer session. In the third round, each speaker will deliver a three-minute closing speech. The audience will vote at the beginning and the end of the program. Whichever side persuades the most people wins the debate.

Founded in 1947, PLU’s debate team is one of the oldest and most decorated forensics programs in the country.