TACOMA, WASH. (May 2, 2016)- Forty years of nursing experience is not on the usual résumé for politicians, but that did not stop Rosa Franklin ’74 from running for office. Franklin hasn’t been concerned with what is usual. She's concerned with bringing people together to solve problems.

Franklin, the first African-American woman to serve as a Washington state senator, attended several South Sound universities, but earned her master’s degree in social science and human relations from Pacific Lutheran University in 1974. At the time of her attendance, Franklin was raising children, working and taking night classes.

Her formal education began as a nurse in her home state of South Carolina. She then moved to a military base in Germany with her husband and started a family. Eventually, her husband’s military career relocated the family to Tacoma where Franklin has remained ever since.

“My first job was in New Jersey, and then New York, then overseas. I made it around the world and ended up here,” she said, laughing. 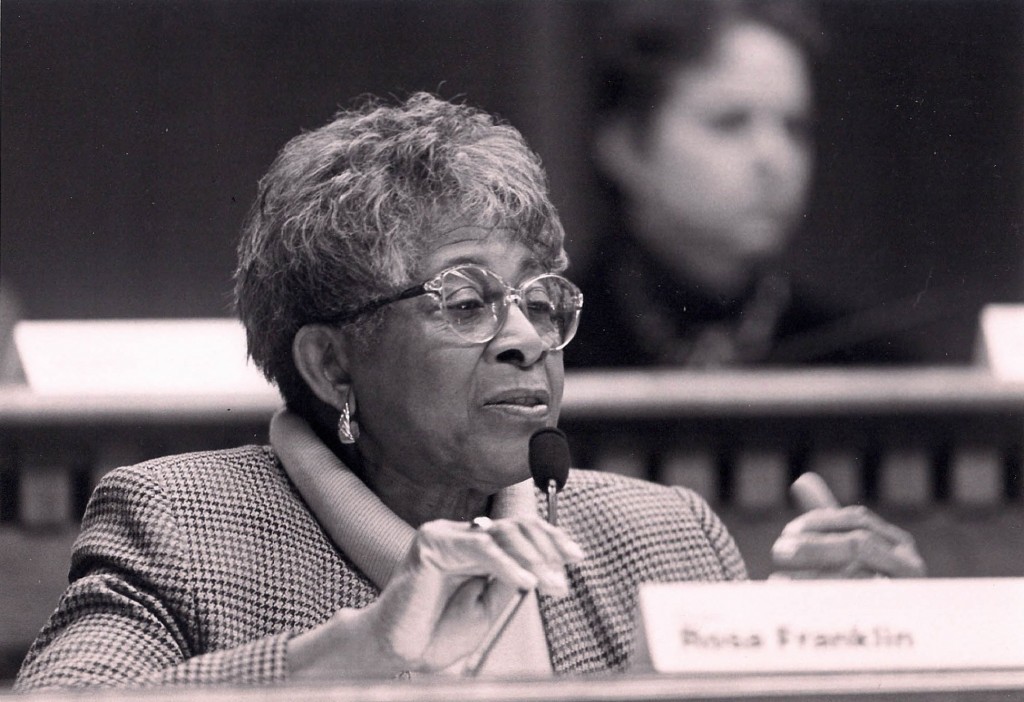 Rosa Franklin '74 is shown in an undated photo during her time with the Washington state Legislature. (Photo courtesy of Franklin)

During her nursing career Franklin was an active volunteer in the Pierce County Nurses Association and the League of Women Voters. She was a precinct officer for the 29th District (Pierce County). Franklin worked hard to get other nurses involved in nursing laws and greater health care legislation.

Franklin’s activity in public service only continued. In 1990, after years of volunteer and community work, Franklin decided to run for the state Legislature. With strong encouragement from her friends, Franklin began a successful grassroots campaign.

"I’m no Harriet Tubman. Let’s get on with it and bring people together to solve problems."- Rosa Franklin '74

“Because I had volunteered and I had worked and I knew the district, I said ‘well if I am going to do this I am going to bring in people who were never involved so they can learn,’” Franklin said. “And because of that I won overwhelmingly.” That win launched Franklin into a 20-year stint in state politics. Her extensive background in health care, both public and private, and her time in the political sphere gave Franklin experience that was hard to beat. “If you have the experience and you have been there, then I think you can craft better laws” she said.

Franklin focused on health care and social justice during her tenure in the Legislature. One of her chief accomplishments was starting the Governor’s Interagency Council on Health Disparities. The group “develops recommendations to eliminate health disparities by race, ethnicity and gender,” according to the council’s website.

For Franklin, the council was a time to bring people together and talk about the issues of health equity and access, “so that everyone can work together in order to address the issues that are affecting the people’s health in the state of Washington,” she said. The establishment of the health care council and the Washington Housing Policy Act, which helped establish affordable housing, were two of her career highlights.

From a nurse and volunteer to a longtime politician, Franklin has been deeply involved in service and community work. She retired in 2010, leaving a legacy of social justice, equity and care. As for being the first black woman in the state senate: “I’m no Harriet Tubman,” Franklin quipped. “Let’s get on with it and bring people together to solve problems.”