Image: Kelly Hall ’16 is graduating this spring with an individualized major in Native American and indigenous studies. (Photo courtesy of Hall).

TACOMA, WASH. (May 6, 2016)- Kelly Hall couldn’t decide on a major when she first came to Pacific Lutheran University. “I didn’t know for sure what I wanted to do, and several fields I explored just didn’t fit right,” said Hall, a senior at PLU. “I hadn’t settled and was looking for something else.”

It soon became apparent that Hall needed another option, and PLU created one. Working with her advisor, Suzanne Crawford-O’Brien, Hall is now just weeks away from completing an individualized interdisciplinary major in Native American and indigenous studies. “I just went back to what I was interested in,” she said.

Hall is a member of the Samish Indian Nation, a Coast Salish nation from Puget Sound. She didn’t know what she wanted to study by the end of her first year at PLU, so she decided to pursue her love of her own Native American heritage and the cultures of other tribes.

A group on campus had been working with Crawford-O’Brien, associate professor of religion and culture, to create a new program that would involve the study of Native Americans. But that program was not  ready in time for Hall to major in it during her time at PLU. 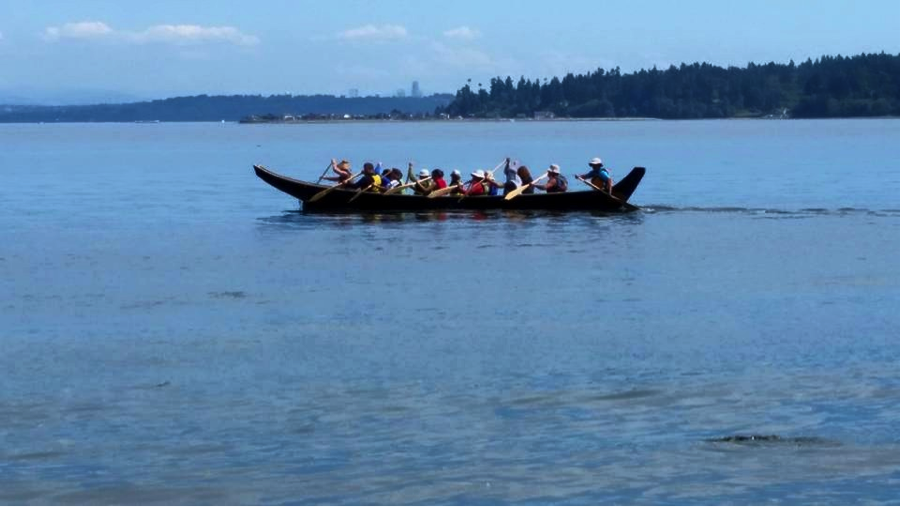 Above is a photo from senior Kelly Hall's youth Tribal Canoe Journey (courtesy of Hall).

“I was lucky there was a group already making this major,” Hall said. “I get to kind of be the guinea pig.”

So, an independently designed major was created and approved. Focusing on the four disciplines of religion, anthropology, history and language, Hall and Crawford-O’Brien came up with a list of classes for Hall to choose from.

Now a senior, the only thing between Hall and graduation is her capstone. Her project focuses on the ideas of interconnectedness, Native American culture and spirituality, Samish language, education and the environment. She is seeking to convey the value of interconnectedness that is specific to the Samish Indian Nation.

“In Xws7ámeshqen (Samish language) there is not a word that directly explains the concept of interconnectedness. It is much more complicated than that,” Hall said. “The idea that everything is connected is too important to be described in one word. Rather it is something that exists within many words.”

Hall worked with a tribal elder to come up with a phrase equivalent to the English word interconnectedness.

“When I talked to my tribal elder and asked him if we had a word to explain interconnectedness, the first thing he said was -mixw, a suffix in our language that means life force or anything with life force in it, like the earth,” she said. “A lot of our words in our language have to do with life and the environment, and that is why there is not one word that adequately describes the idea of interconnectedness. As Indians we describe life force as being spiritually and physically connected to everything.”

"A lot of our words in our language have to do with life and the environment, and that is why there is not one word that adequately describes the idea of interconnectedness. As Indians we describe life force as being spiritually and physically connected to everything."- Kelly Hall '16

Hall said the Samish know of this life force because it is built into their language in such a way, interwoven within so many seemingly unconnected words such as people, fish meat, trees and forest. After breaking down the word for trees/forest, Hall and her elder ended up with something along the lines of “to appear out of the life force of Mother Earth,” she said.

Hall said the break down for the word for people is, “As people, we are partakers of what is produced by the life force.”

“My elder explained that this is why in Indian culture we are taught to treat all of our resources with respect,” she said. “We recognize that when we consume meat that it has a spirit, for example.

“He said as Indians we are taught not to mistreat or disrespect resources because if we do then things like global warming happen.”

After going through that entire explanation process, Hall and her elder worked through a new phrase:  sqw’ó7 tse mékw’-stáng. Hall said this directly translates as “united the everything.” In other words, everything is together or united. She said this interconnectedness and unity through life force is why we should all care about and study the environment.

“Our world is sick,” she said.

Furthermore, she said it’s important to interact with nature and other cultures outside of the classroom. “For native students and non-native students alike there tends to be a huge disconnect between studying and actually being out in the environment taking action and partaking in outdoor activities,” Hall said.

Hall, who is from Puyallup, first visited her tribe in 2003 and explored her culture by riding in a traveling canoe with her father. After declaring her major as a sophomore, she received a Wang Center grant to go help research involvement in cultural events.

At first, she said she felt like an outsider. She didn’t know anyone and had to learn important aspects of the culture. But then last summer, Hall went on her first youth-led Tribal Canoe Journey, where she met many young people from other tribes who also are interested in their cultures.

“I learned so much more on the canoe journey in just five days than I did through months of visiting and going to cultural events,” she said.

The Samish tribe, originating from the San Juan Islands and Anacortes areas, has no official reservation, so scattered membership has been an issue. But Hall said she believes the geographic spread has allowed for connection in other ways.

Hall will graduate this spring after finishing her classes within the language, religion, anthropology and history departments. She wants to work for her tribe in a cultural or language department.

Hall said she decided to attend PLU because it was close to home, but has since come to love the friendly staff and professors here. She said she is thankful for the opportunity to have found her vocation. “I think many students don’t know that individualized majors exist,” she said, “but it’s a really cool option at PLU.”