TACOMA, WASH. (Oct. 6, 2016)- The scholarship of a Pacific Lutheran University faculty member has evolved into a three-part, cross-cultural project that brings together artists and scholars from around the world.

Paul Manfredi, chair of Chinese studies, recently published his book “Modern Poetry in China: A Visual-Verbal Dynamic,” which explores the phenomenon of poet-artists in contemporary China in its final chapter. His forthcoming book takes a deeper look at their visual and poetic work.

Both were the catalyst for a partnership of artists in China and Washington state — six from each area — who have created a mixed-media visual arts exhibition that will culminate in a symposium held jointly by PLU and the Seattle Asian Art Museum later this month.

The artwork and poetry also live on a website, ekphrasticassimilations.org. It invites interested writers to contribute their own poems to the project, as well.

“The website will be maintained for a year, continuing to resonate with people interested in the project,” Manfredi said, adding that it will “serve as a platform for both visual and verbal creative exchange.” 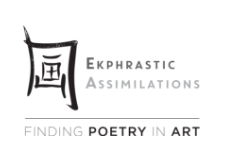 See art and poetry from China and Washington state come together

The first day of the culminating symposium will be held on PLU’s campus Oct. 28. “The conference aims to take a very broad approach to understanding word-image aesthetics in contemporary China and beyond,” Manfredi said.

The project, titled “Ekphrastic Assimilations: Finding Poetry in Art,” resulted from a months-long exchange of painting, photography and poetry. Rick Barot, associate professor of English at PLU, also participated in the project. Barot contributed a poem, which is among a collection of poetry in three languages.

The physical exhibition is on display at VALA Art Center in Redmond until Oct. 30, in conjunction with Kirkland-based Ryan James Fine Arts.

“Ekphrastic” refers to poetic responses to art, while the idea of “assimilation” refers to the act of crossing cultural barriers, according to the project website. “Crossing boundaries between word and image is akin to traveling from one cultural context to another,” it states.

Manfredi is the project’s creator, the conference director and the exhibition curator. He says the exercise of using poetic word to respond to visual prompts produces a kind of intimacy that brings viewers and objects into a closer relationship — including the artists whose work first inspired the poetry.

“Our use of ekphrasis brings people and art (broadly understood) together in very meaningful ways,” Manfredi said.