As the election cycle progressed, he began attending monthly dinners hosted by the Pierce County Democratic Central Committee (PCD), a countywide organization that recruits and supports democratic candidates seeking local, state and federal offices. The gatherings on the first Monday of every month allow community members to engage with elected officials.

Beiermann, an economics major, remembers feeling hesitant to participate at the dinners in the beginning. He says the PCD focuses on bridging the gap between the electorate and elected officials. But, despite being a member of that electorate, his uncertainty took over.

So, he ordered food and ate in silence, unsure of how to engage. “I thought it was really cool,” he said, “but I also didn’t feel like I was a part of it.” 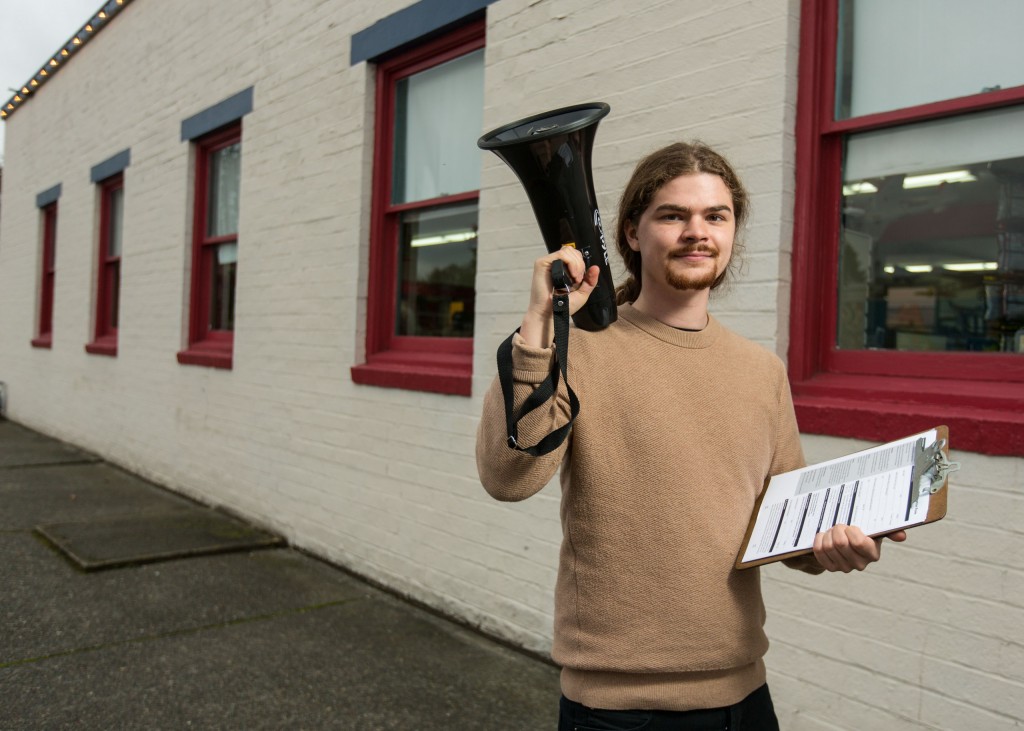 Beiermann found his role as a young person in the election process in March, when he attended the PCD caucus where 30 local election districts caucused together in the same room. He attended as a newcomer, but left an elected delegate for precinct 655, where PLU resides.

“It was the first day I had high political efficacy,” he said, “feeling like I could be engaged in politics and have a place.”

Soon after, Beiermann started helping the county party write its platform, before participating in the congressional district caucus. He ran for one of five available slots there and was elected as a delegate for Sanders, which involved working with other delegates to incorporate the candidate’s policies into the PCD platform.

“It was wild. I stood up, and gave a speech, and it was really empowering,” he said. “I couldn’t imagine anything like (that) ever happening.”

Beiermann said his political efficacy grew stronger after developing policy as a Sanders delegate. Although Sanders didn’t win the democratic nomination, Beiermann continued his work with PCD because of his newfound passion for politics. In May, he was elected as a precinct committee officer to help increase voter turnout in future elections, among other duties.

Beiermann’s political efficacy extended to PLU’s campus, as well. He was at the center of Lute Vote, a campus-wide effort to increase civic engagement among PLU students. He helped register more than 300 voters by raising awareness in various government and politics courses, as well as organizing community-based events such as Parkland Rocks The Vote.

Beiermann also partnered with PLU Concierge for a Get Out The Vote Drive — making it easier to send mail-in ballots — and organized political forums and debate watch parties on campus.

Beiermann credits International Honors, economics and social justice courses for catching “the activism bug.” They gave him the confidence to openly discuss issues such as minimum wage, labor injustices, racial justice and more.

Beiermann said his support system on and off campus also has helped him greatly. He said Maria Chavez, chair of politics and government, “has been huge as a sounding board, believing in all of the ideas and hopes that I have had.

“Having someone who has so much knowledge talking with me has been an awesome outlet because I have not had that at home,” Beiermann said.

Beiermann insisted young people have nothing to fear when engaging in politics. He said they can promote the most change by confidently participating. The key to confidence, Beiermann said, is education.

“When I started, I didn’t know anything. But I went there, I showed up, and I said, ‘I want to learn,’” he said. “Even if you know nothing about politics…show up. Half the battle is showing up, the other half is learning.”