Global leader in diplomacy to visit PLU and discuss how ‘Conflict is Inevitable, Violence is Not’

Global leader in diplomacy to visit PLU and discuss how ‘Conflict is Inevitable, Violence is Not’

TACOMA, WASH. (Jan. 27, 2017)- The third biennial Ambassador Chris Stevens Memorial Lecture will be held at 7 p.m. on March 1 in the Karen Hille Phillips Center for the Performing Arts at Pacific Lutheran University. Shamil Idriss, a global leader in diplomacy and global affairs will deliver a lecture titled “Conflict is Inevitable, Violence is Not.”

Idriss is President and CEO of Search for Common Ground, a global conflict transformation organization with offices in 35 countries. He previously served as Deputy Director of the United Nations Alliance of Civilizations and Senior Advisor at the World Economic Forum.

Idriss, whose life’s work has been defined by his commitment to the power of grassroots citizen-generated conflict prevention and peacebuilding, says his lecture at PLU will address “how we deal with differences in an increasingly connected, but also increasingly divided world.”

Idriss plans to encourage attendees to consider how effective peacekeeping, activism and advocacy will require a shift in understanding and practice. “There are ways that we can progress together and advance social change, but it’s going to require a different approach to advocating for our causes,” he said.

Established in 2013 and presented by the PLU Wang Center for Global and Community Engaged Education, the Ambassador Chris Stevens Memorial Lecture celebrates the life of the extraordinary public servant killed on September 11, 2012, in Benghazi, Libya.

“To be invited to speak at an event that is named after Ambassador Stevens is genuinely an honor,” said Idriss. “What he represented in the way that he lived his life was a profound excitement, passion and curiosity about the rest of the world.”

As CEO of Soliya, an international nonprofit organization dedicated to cross-cultural engagement, from 2008-2014, Idriss worked closely with family members of Ambassador Stevens and the Obama administration to establish the J. Christopher Stevens Virtual Exchange Initiative.

“I feel as though I’m one of the few people who didn’t know him,” Idriss says of Stevens. “It’s extraordinary how many people I’ve talked to who came into direct contact with him and on whom he had a really profound impact, not only across the Arab world but also in the U.S.”

On March 1 at PLU, Idriss will encourage attendees to lean into the process of achieving peace and building communities defined by civil discourse and cooperation.

“Peace is not just the absence of violence, but also the presence of something,” Idriss said. “Now in this country, as well as in a number of other countries across the world, that’s never been so much on people’s mind.”

Admission to the third biannual Ambassador Chris Stevens Memorial Lecture is free and registration is encouraged. 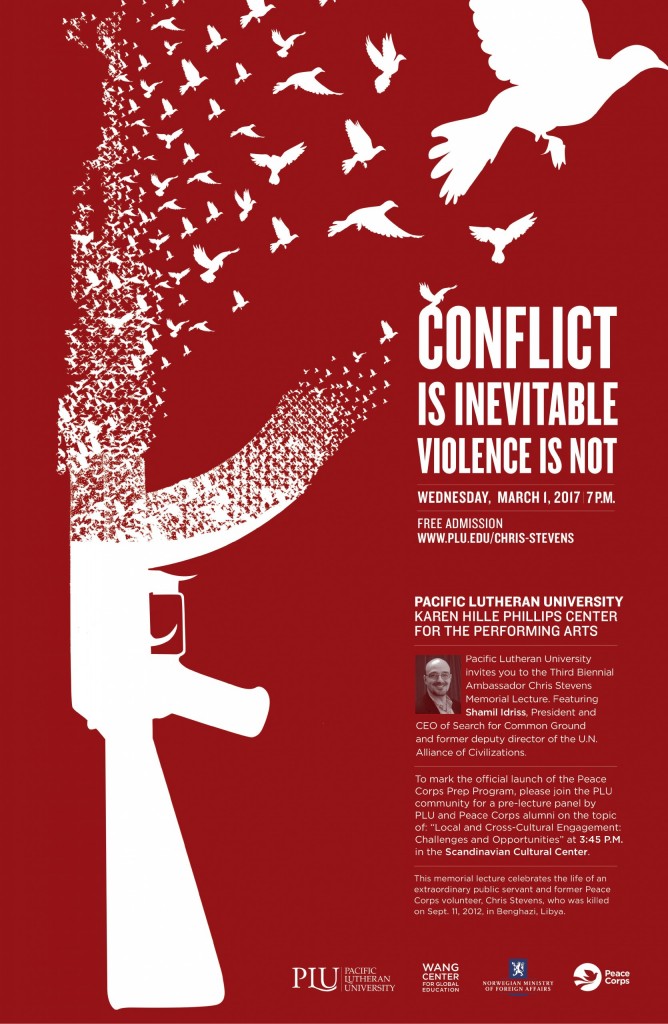