Image: Steve Dickerson, head coach for men’s basketball, retires in May after 14 years at PLU. (Photo by John Froschauer/PLU)

Lester and his teammates fought hard through a lingering double-digit deficit against Linfield College. The Lutes never took the lead that night, and eventually fell to the Wildcats 80-72.

But, despite the score and the frustrations that accompanied it, Lester proved to be the kind of player head coach Steve Dickerson expects first and foremost, basketball game or not.

When an opposing player took a hard fall late in the second half, Lester offered a hand up without hesitation.

That’s the culture Dickerson has built at PLU. Lester’s basketball career might be over, but the positive lessons he learned on the team have “prepared him for the rest of his life,” he said.

So, Dickerson, who retires in May after a 46-year coaching career, didn’t talk much about the scoreboard when he sat in his office the following Monday reflecting on his final game.

Lutes are invited to honor Steve Dickerson’s coaching career at a celebration May 6 at the Washington State History Museum, 6-8 p.m. A short program at 6:30 p.m. will highlight the impact Dickerson has made on many people’s lives. Registration for the event available soon at golutes.com. Email athletics@plu.edu to learn more.

Dickerson hopes that message continues after he’s gone, one he’s worked to build for 14 years at PLU. He started as an assistant, coaching alongside his former college roommate. He came to PLU after retiring from public-school coaching in Ohio — a run that included facing a young LeBron James, before the NBA megastar was drafted.

“I wanted to keep my toe in coaching,” he said.

Dickerson took over the top job three years later, “the last man standing” out of 100 applications, he said. “I’ve grown a lot as a coach and as a person being here,” he said.

Dickerson didn’t know his journey would last this long; he says he took everything a year at a time. But PLU is a comforting place that makes it easy to stick around, he said. “It’s a place that grows on you. It might sound cliche, but it’s like one big family.”

That family mentality trickles down to the basketball team in transparent ways. Basketball players talk about their coach like he’s a father figure.

“He’s been supportive of me both on and off the court,” said junior Dylan Foreman, who says Dickerson helped him build confidence.

And senior Erik Swartout says Dickerson’s team-first mentality has been ever-present throughout his five years as a student athlete at PLU. “He’s made a tremendous impact on me,” Swartout said.

One way Dickerson has taken his mentorship beyond the paint is through Real Life Wednesday, a program that brings professionals to campus to talk with his team about vocation and keys to success after graduation.

Dickerson acknowledges it’s not original (coaches at Ohio State and the University of Washington, to name a couple, have similar programs). But the focus is to give his players a glimpse into the lives of professionals who practice what PLU preaches. “The key is to bring in successful people and reinforce what we do,” Dickerson said.

And it works. He said the players learn valuable skills and build meaningful relationships through those networking opportunities. Dickerson proudly touts the near-perfect graduation rate and post-graduate success of all his former players.

Despite their success after moving on from college, Dickerson says many of them stay in touch. He attends alumni weddings and sends hand-written letters to acknowledge their major milestones.

After the Lutes’ last game Feb. 17, basketball alumni from all over gathered to honor their coach. Former players traveled from San Francisco, Portland, the Tri-Cities and elsewhere to send him off right. Some purchased T-shirts bearing Dickerson’s likeness, with one of several team mottos on the back: “If you want to go fast, go alone. If you want to go far, go together.”

Dickerson said the outpouring of support overwhelmed him well after the reunion ended; he says he’s still processing it all. “My greatest accomplishment is that nobody asked me to leave,” he quipped. “I’ve always left (jobs) on my own terms.”

Except for last year.

Dickerson initially planned to end his career after the 2016 season. But some folks, including five grateful juniors (now seniors), had other plans. “They asked me to come back,” Dickerson said. “I’m very glad I did.”

So, Dickerson is mostly leaving on his own terms. A celebration May 6 at the Washington State History Museum will formally send him off before his last day on campus May 31 (even though he’s not much for pomp and circumstance).

As for the future of the basketball program, Dickerson hopes for more of the same: “Keep turning out great people,” he said. “It’s a good place.” 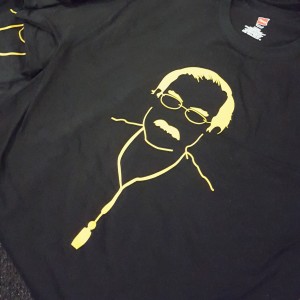 Basketball fans, former players and other members of the PLU community still have a chance to buy Steve Dickerson retirement T-shirts from the Department of Athletics. The back features a men’s basketball team motto:

Supply is limited. Cost is $15. Email athletics@plu.edu for purchasing information.