Lute reflects on his Japanese-American identity through pilgrimage, community event

Lute reflects on his Japanese-American identity through pilgrimage, community event

Image: Stephen Kitajo ’12 serves on the board for the Puyallup Valley Chapter of the Japanese American Citizens League (JACL). His role in organizing the fair’s 75th Remembrance event in September includes sifting through archival records to confirm the names of the Japanese Americans once confined to the fairgrounds. (Photo by John Froschauer/PLU)

TACOMA, WASH. (Aug. 29, 2017)- The names of 7,500 Japanese Americans will soon be displayed at the Washington State Fair in Puyallup, just 9 miles from Pacific Lutheran University.

The banners bearing the names of those interned at the Puyallup Assembly Center during World War II mark a dark chapter of Pierce County’s history, when the federal government seized control of the fairgrounds for the forced relocation of its citizens.

Stephen Kitajo ’12 is working to verify all those names, after completing a historical journey of his own this summer.

“It’s been 75 years since they were forced out of their homes and forced from their lives,” Kitajo said. “This is our chance to honor them and educate the public.” 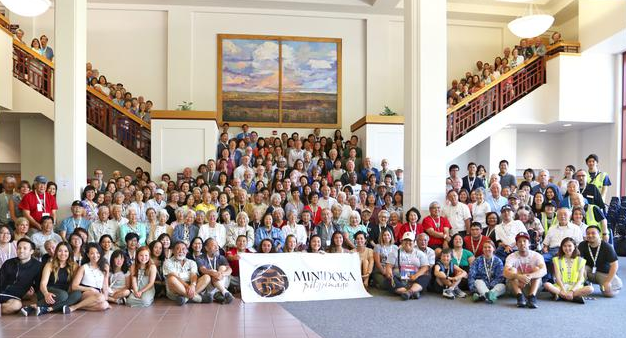 Visit the Minidoka Pilgrimage website to learn more about the annual tradition.

The event serves to raise awareness around the history of the fairgrounds in connection with Japanese internment during the war. The names are part of an exhibit to be hosted at the fair’s museum, and a pre-cursor to a permanent marker on the fairgrounds that will feature the same collection of names.

“That’s a huge thing to be able to call attention to,” Kitajo said. “It doesn’t matter how small you write out those names. It’s still going to catch people’s attention.”

Kitajo said he’s always had a connection to the history of Japanese internment, both as a history major and a Japanese American. Both Kitajo’s maternal and paternal grandparents were detained during the war. For the past six years, Kitajo has traveled to the Minidoka National Historic Site as part of the annual Minidoka Pilgrimage — a four-day educational journey that helps Japanese Americans reconcile their past.

The Minidoka National Historic Site houses what remains of the Minidoka War Relocation Center in Jerome County, Idaho. The camp operated from 1942-45 and held more than 9,000 Japanese Americans, in concordance with Franklin D. Roosevelt’s executive order that initiated the incarcerations.

The annual Minidoka Pilgrimage invites former incarcerees to join their family and friends on a journey to the site, where they reflect on the impact of Japanese internment on the nation’s history and their own family narratives. This year’s pilgrimage — from July 6-9 — saw 320 participants immersed in educational films, emotionally candid discussions and a tour of the Minidoka site.

The latter, Kitajo says, is perhaps the most poignant. For him, the impact of setting foot on the camp’s grounds is most powerful.

“We can hold these lectures and screen films anywhere,” Kitajo said, “but to do that in combination with visiting the site and really providing context to what we’re learning about is a crucial piece and a big part of why we do the pilgrimage.”

"It was just one of those topics that was not discussed and you knew better than to ask about it. From what I gather from relatives, they didn’t talk about it because they didn’t want their kids to worry about it. Even though I may not know their particular story, the chance to go and get an idea of what they went through was a chance I never thought I would have."- Stephen Kitajo '12

Kitajo became involved with the Minidoka Pilgrimage in 2012 as an intern at the Japanese Cultural and Community Center of Washington. He participated in his first pilgrimage after winning a scholarship to attend through the center’s youth scholarship program.

Kitajo said his first pilgrimage was deeply personal. His maternal grandparents were held at Minidoka after being uprooted from their home during the war. His uncle was even born inside the camp.

Kitajo’s knowledge of this family history, however, was stifled growing up. His grandmother’s death and his grandfather’s health problems prevented Kitajo from truly learning about their experiences. Even Kitajo’s mother knew very little of her parents’ lives inside the camp.

“It was just one of those topics that was not discussed and you knew better than to ask about it. From what I gather from relatives, they didn’t talk about it because they didn’t want their kids to worry about it. ” Kitajo said. “Even though I may not know their particular story, the chance to go and get an idea of what they went through was a chance I never thought I would have.”

Visiting the Minidoka site helped Kitajo connect with that family history he had yet to engage. It’s an experience Kitajo says is common with younger generations of pilgrimage participants, especially those who travel with former incarcerees.

“Overall, there’s just so much trauma for many individuals — not just survivors, but sometimes their children and grandchildren who never understood why their parents or grandparents acted the way they did,” Kitajo said. “Those moments are probably some of the most emotional that I’ve seen on the pilgrimage, when you hear from family members, ‘I have never seen my grandpa cry until today.’”

Kitajo volunteered to be on the Minidoka Pilgrimage board after completing his first trip, and now serves as co-chair. Kitajo says he loves working to make the pilgrimage happen, seeing participation grow and witnessing a diverse younger generation of Japanese Americans reconcile their family histories.

“It hasn’t been until recently that we’ve seen younger generations trying to come back to reclaim some of that identity — especially for multi-ethnic members of the younger generation,” Kitajo said. “I have friends who do struggle with dual identities or figuring themselves out. This pilgrimage is part of their journey.”

For Kitajo, the Minidoka Pilgrimage was crucial to understanding the mysteries of his family’s past and his own identity as a descendant.

“My first pilgrimage was very meaningful in giving me that perspective, as far as the hardships my family endured and the sacrifices they made,” Kitajo said. “Knowing them helps me understand who I am.”

The Washington State Fair will host the event at the Coca-Cola Stage on Saturday, Sept. 2, at 10 a.m. Lori Matsukawa from King 5 News will emcee. Tom Ikeda, executive director of Densho, will serve as the keynote speaker. Visit thefair.com for more information.