“Hair is a really important piece of our culture and who we are, and it’s an interesting piece to navigate when you’re also at a predominantly white institution,” said Taiwo, outreach and prevention coordinator in the Center for Gender Equity at Pacific Lutheran University.

So, Taiwo and Hambrick — assistant vice president for diversity, justice and sustainability — decided to uplift the experiences of black students at predominantly white institutions (PWIs) who wear their natural hair.

In 2016, they crafted a research paper examining those experiences, which are often marginalized at in higher education. It focused on how black students navigate the natural hair journeys on campuses in the Pacific Northwest.

Taiwo and Hambrick jumped at the opportunity to write the paper after learning of a political science journal accepting submissions on the theme of #BlackGirlMagic, a movement created in 2013 by CaShawn Thompson to celebrate black women. 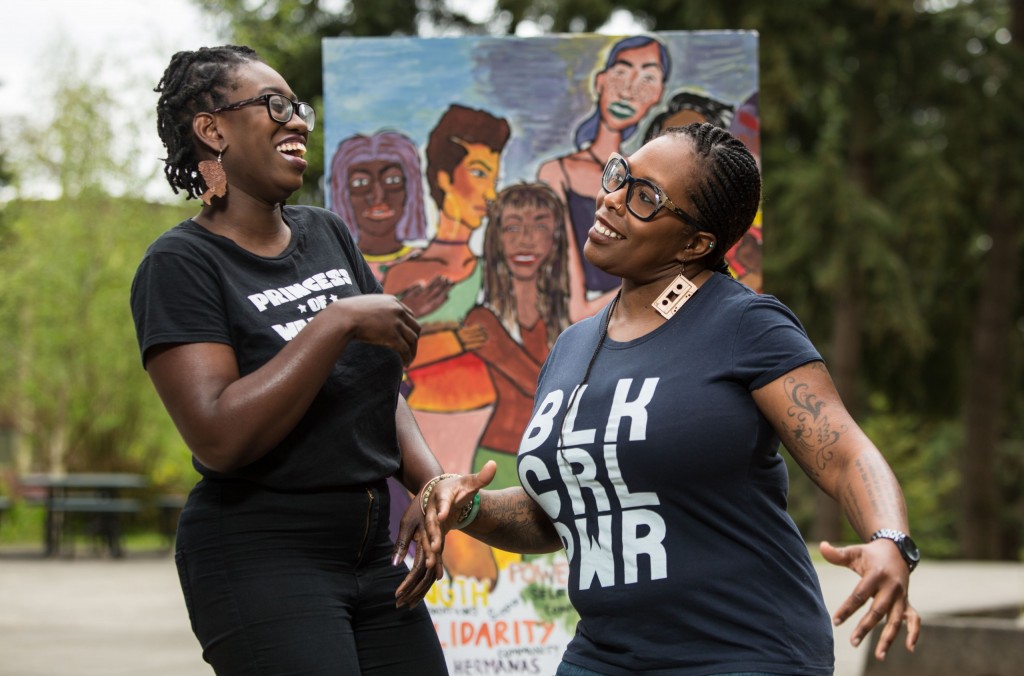 Taiwo and Hambrick interviewed seven individuals who were either current students or alumni of PWIs in the region. Each participant self-identified as a black female or black genderqueer. They were either in transition or had completed the process of going “chemical free” — opting to skip hair relaxers and other products that alter the qualities of natural hair.

Three key themes emerged from the interviews. The first focused on the role of family support in the natural-hair journey. Some of the participants reported that they received support from other family members who embrace their natural hair, while other participants were met with confusion and disapproval from family.

Another theme assessed the relationship between natural hair and understandings of femininity and masculinity. For example, one participant who identified as genderqueer shared their experience going to the barber shop instead of a beauty parlor for hair care, and how that choice influenced their hair journey and gender identity. A different participant discussed being called a boy by her family members after cutting her hair short and embracing her femininity in a new way through that experience.

The third theme concerned hair and body health and the return to identity.

“For a lot (of the women), it was a personal health choice,” Taiwo said. “Both thinking about the strength of hair but also wanting to be in touch with their roots.”

"For a lot (of the women), it was a personal health choice. Both thinking about the strength of hair but also wanting to be in touch with their roots."- Tolu Taiwo
After the first journal they submitted to didn’t accept the article, Hambrick and Taiwo spent time fine-tuning the content, orienting the paper more toward higher education and student affairs. They then submitted it to the Association for the Study of Higher Education and National Women’s Studies Association conferences in 2016, and were accepted to present.
Taiwo and Hambrick presented different aspects of their research at each conference that November.

At ASHE, the pair participated in a roundtable discussion during which they shared their research process. Hambrick said she enjoyed how the roundtable dialogue centered on black women. They discussed transitioning, black women in doctoral studies at PWIs, and black girls in K-12.

Engaging in conversation with black women about black women was a powerful experience, Hambrick said.

“We were at a table talking to black women about black girl things, and it was the best thing ever,” she said. “It was fun to present our research, but what was most impactful was that the conversation of black women was at the center of conversation for 50 minutes. That experience being able to center our experiences, our laughter, and our pain was the most valuable thing to me along with some of the feedback we got.”

At the NWSA, Hambrick and Taiwo discussed #BlackGirlMagic in connection to natural hair and how to introduce supportive initiatives and programs at PWIs. Taiwo said it was exciting to see an audience of people who wanted to discover how they could create better environments for black women.

One of the activities Taiwo and Hambrick led during their presentation invited audience members to define what #BlackGirlMagic meant to them. Taiwo said authenticity, community and self-determination were words that came to the forefront.

Hambrick started transitioning to natural hair in 2015, after noticing the beauty in other black women’s natural styles. She said her security in her identity made the choice a simple one.

“I was very comfortable in who I am, professionally and personally, and I couldn’t care less whether or not somebody liked it or had something to say,” Hambrick said.

Taiwo began her journey in 2013 as a senior in college. She said she grew tired of her attempts to “assimilate hard” at a PWI by manipulating her hair texture.

"Our responsibility as PWIs is to create environments where we mitigate the pain of always having to explain who we are and our experiences."- Angie Hambrick

“It’s one thing to own a hairstyle and do it for you,” Taiwo said. “I didn’t feel like me, and I didn’t feel healthy.”

Taiwo said the change was hard but brought her closer to who she really wanted to be.

Hambrick said her personal background with body policing in the workplace also drew her to the topic.

“I came from a place, being here at PLU, with people telling me that my hair had to look a certain way, my earrings had to be a certain size, I had to cover my tattoos, maybe I shouldn’t have a nose ring,” Hambrick said. “If that’s our experience, then what are the experiences of students at a predominantly white institution?”

The paper’s research rose critical questions about the responsibilities of PWIs to support black women in their natural-hair journeys. While Hambrick doesn’t think institutions are necessarily responsible for creating specific programs, she said they should create environments of inclusivity and acceptance for natural black women.

Part of fostering that secure, supportive environment is ensuring that black women have the ability to experiment with their hair without being confronted or questioned.

Taiwo said that many participants expressed uncomfortability with the confusion that white students, faculty and staff often communicate toward various natural-hair practices and styles. Hambrick said institutions should take responsibility for creating supportive environments for these students.

“Our responsibility as PWIs is to create environments where we mitigate the pain of always having to explain who we are and our experiences,” Hambrick said.

For PLU particularly, both administrators said it’s essential for the university to create space for black women and other students of color to form community. Community for staff and faculty in particular, Hambrick said, is just as essential.

“We talk a lot about how representation matters to students. We talk about how it’s really important for students of color to see themselves in the faculty and staff. Absolutely. But I think it’s important for faculty and staff to also see each other in those spaces,” Hambrick said. “Not for PLU to create that community for us, but they need to create the environment and space for us to be able to do that for ourselves.”