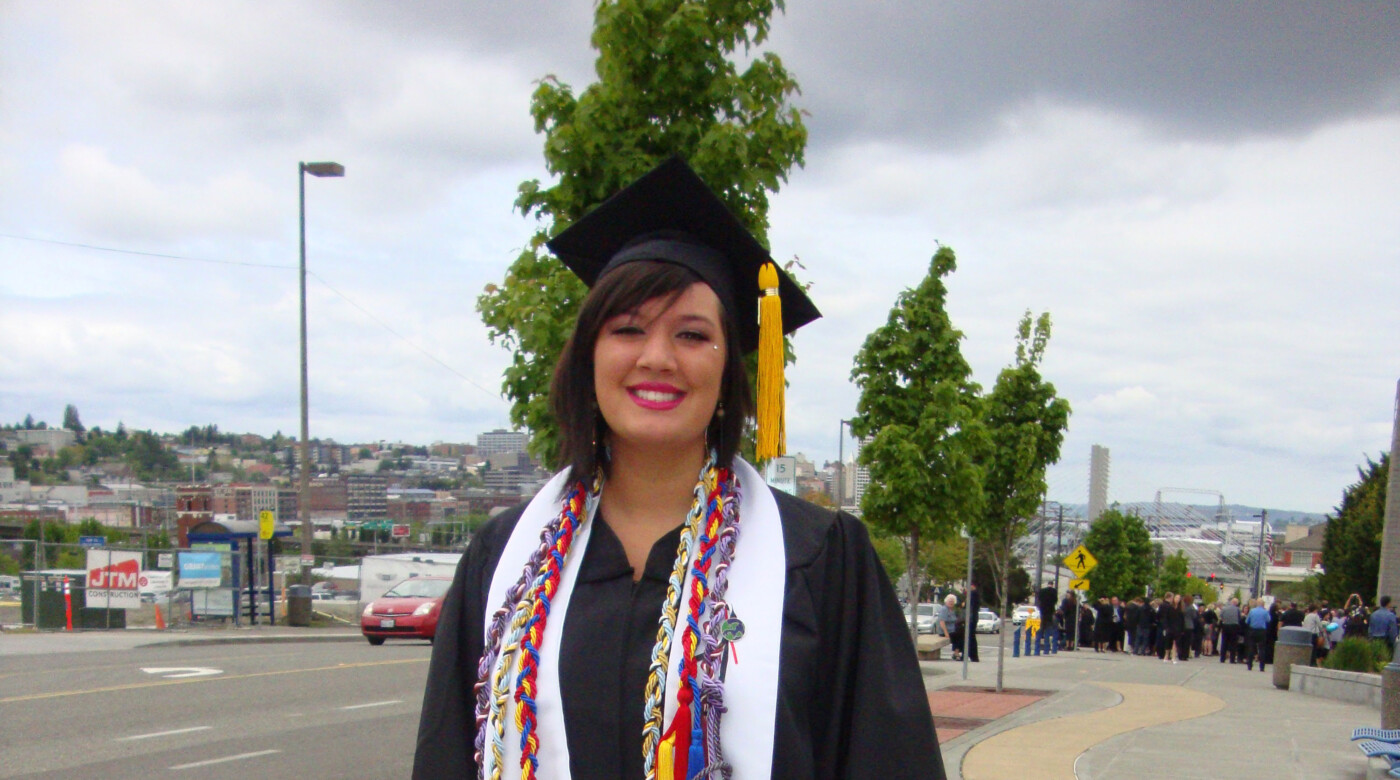 By Kolby Harvey '08
Guest Writer for PLU Marketing and Communications

Lizbett Benge ’11 describes her educational journey as “a long and winding road.” It began with her immersion into foster care and deeply influenced her time at PLU, where she grappled with a set of life experiences few of her peers could understand.

Benge, who has a background in theater and interdisciplinary studies, was awarded a doctorate in gender studies in April by Arizona State University. While at ASU, Benge won a prestigious Woodrow Wilson Dissertation Fellowship in Women’s Studies in 2019. She has recently been named a Robert A. Oden Jr. postdoctoral fellow for Innovation in the Humanities at Carleton College in Minnesota.

Benge’s dissertation work focused on foster-care-involved youth. Through a combination of research, interviews, and theater productions, Benge’s project asked a vital question: “What are the strategies for survival that those with foster care experience create and cultivate to lead lives they deem worth living?”

Benge explored this question several ways. She examined self-portraits painted by youths in the foster care system, with an eye on how they represent themselves and their experiences in foster care. She interviewed youth currently in foster care as well as those who, like herself, had aged out of the system. The research culminated in a series of theater productions featuring actors with foster experience alongside those without.

Benge strives to challenge existing narratives and assumptions about foster youth. Because most of our understanding comes from social workers, psychologists, and a slew of bleak statistics, it’s important to craft a more nuanced and comprehensive understanding of life in (and after) the system.

“Not that all of that wasn’t my experience necessarily,” Benge said. But she believes it’s unfair for foster youth “when those are the controlling images and things you have to ‘live up to.” Benge stressed the importance of finding new perspectives.

“Let’s change these deficit narratives,” she said, and instead highlight the strength and resilience of current and former foster youth. 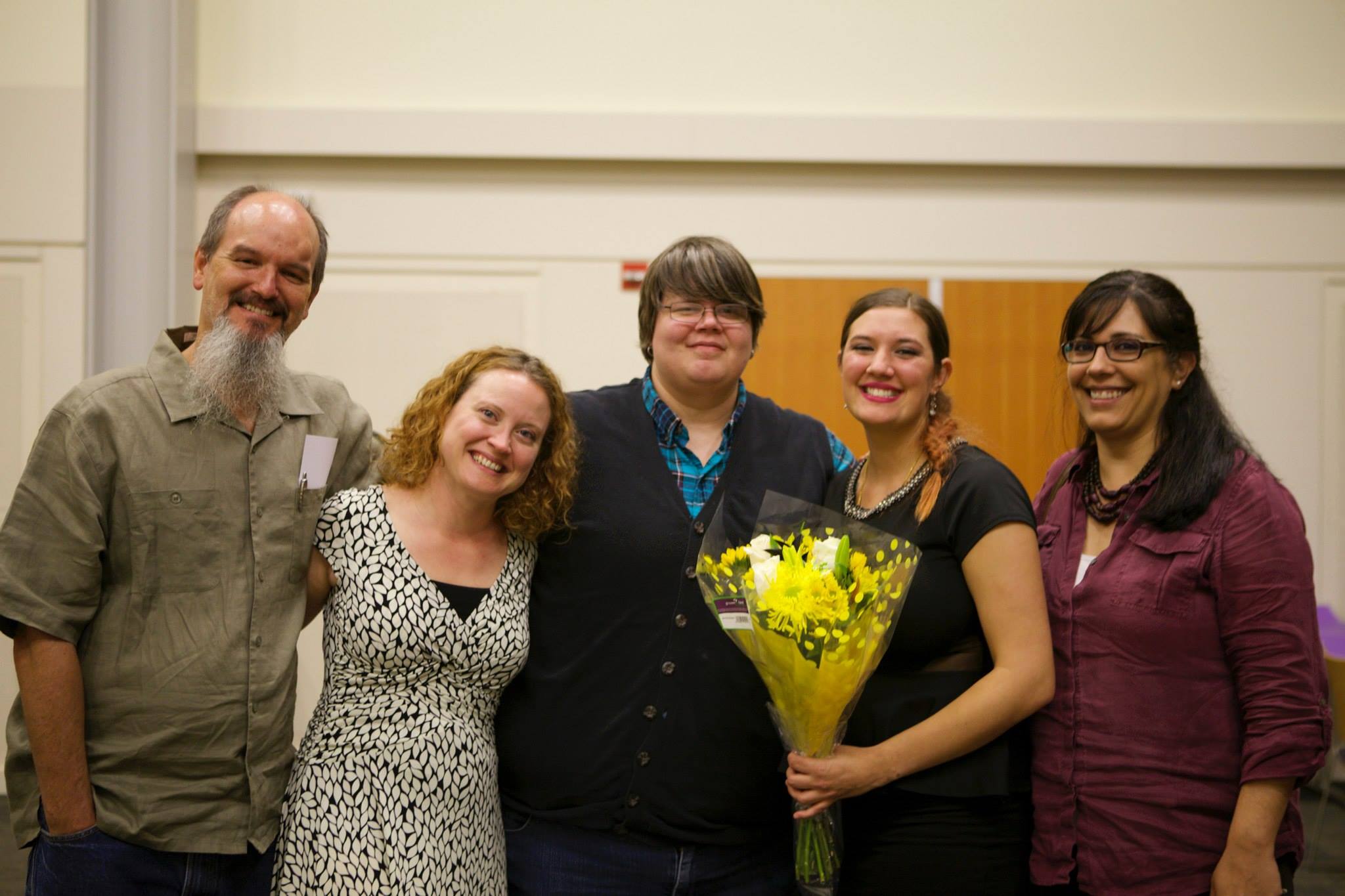 Her medium of choice:  Devised theater, which eschews formal scripts, characterization, and other stage traditions in favor of a looser, more collaborative creative process. For Benge, this openness and flexibility allows “an honoring of what performers are already bringing” as well as a means to “showcase that in such a way that (participants) can take ownership of, be accountable for, and feel good about.”

Benge’s foster experience not only shaped her dissertation work, but her educational journey as a whole.

At PLU, Benge was originally a communications major who signed up for one of Smith’s women’s and gender studies classes on a whim. By the end of her time at PLU, she would take another four courses, for a total of 20 credits, with Smith. In fact, the two often joke that Benge earned “a minor in Jen Smith,” with Smith going so far as presenting Benge with a glitter-encrusted purple cord at graduation.

“Because Lizbett began pursuing her degree at PLU around the same time that I began teaching there, we very much developed as a student and teacher alongside each other,” Smith said. This “interconnected growth” is a facet of mentorship that Smith believes often goes overlooked, as expertise in any field is always “contextual and incomplete.”

Smith added that while she “may have had expertise in women’s and  gender studies as a discipline,” she had a lot to learn from Benge as well. “She had expertise in imagining otherwise, in seeing norms and procedures as constructions and tools, which appeared to others as simply ‘the way things are,’” Smith explained.

“Lizbett’s creativity and constant questioning of ‘What if?’ or ‘What about?’ guided my practices as an educator as much as my knowledge of trans studies and queer theory guided her trajectory as a scholar.”

In addition to Smith, Benge also praised Urdangarain for years of support and friendship. During a semester abroad in Oaxaca, Mexico, the two often Skyped, with Urdangarain providing feedback and guidance on Benge’s capstone project, an analysis of “indigenous feminine identity production” in the context of a local organization, Protección a la Joven de Oaxaca, A.C., that helps indigenous women pursue formal education in the city.

For Urdangarain, advising Benge has been “an honor.” She describes her former student as the kind “you never forget because of her intellectually sophisticated work, for how much effort she put into everything she accomplished, because of her true love for learning, and for the ways in which her commitment to critical thinking and social justice has shaped her research and her activism to this day.”

Prior to the COVID-19 stay-at-home order, Smith had approached Benge with an offer to use partial grant funding to organize a series of arts-based workshops. Benge and Urdangarain were in talks to translate a theater piece about experiences of motherhood written by Benge as part of her master’s thesis project,  “Voices Made (M)other,” into Spanish to grow its audience.

What shape future works will take remains to be seen. But Benge seems ready for anything. Thanks to years of hard work and the support of PLU faculty, she has what she describes as “the solid grounding needed to create socially engaged, critical responsive art and scholarship that the world needs.”

“We all come to these things for different reasons,” Benge said. “For some, it literally edifies our entire being to continue studying and to have devoted time or space or structure to do that in a formalized way.

“Some of us do get these advanced degrees because that’s how we gain access to resources we can redistribute in radical ways into communities. For me, a really tangible reason that I did it was because I was in a really abusive relationship, and I literally needed to get out of the state.”

For the doctorally-curious Benge distills advice down to a single question: “What do you really think this can do both for you and for others?” It’s not a dissuasion so much as it is a call to deep self-inquiry, an acknowledgment that her path was difficult, but ultimately the one for her.

“Depending on how you’re situated in the world,” she explained, “sometimes this is the only way that people will listen to you.”