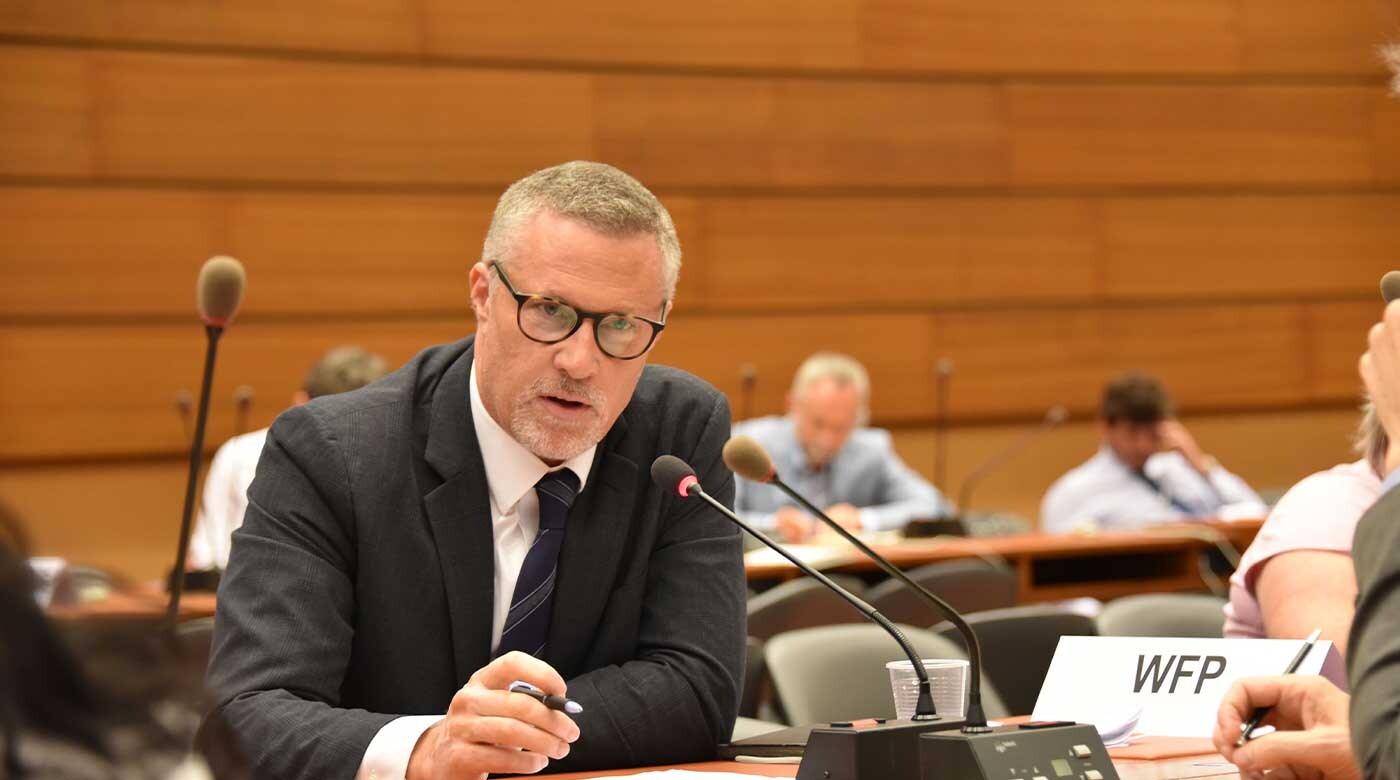 PLU alumnus Brian Lander ‘89 grew up in Washington State's Tri-Cities. But in early 2020, Lander was far from his childhood home, as he helped meet urgent needs in Northwest Syria.

Turkish troops, Syrian and Russian armies, and opposition forces negotiated and battled over resources and land. As the emergency coordinator for the United Nations World Food Programme (WFP), Lander was on the ground in Southern Turkey, directing resources for the approximately 1.4 million internally displaced populations just over the border in Syria.

“Millions of people are crowded into tent camps, struggling to survive and constantly worried about insecurity and an escalation of the conflict,” Lander said. “They’ve been there for years, and it’s a grim existence.”

“So it was personally fulfilling to see the situation first-hand—and respond to the needs,” Lander said by Skype from Rome, where WFP is headquartered. WFP is the UN’s international hunger relief arm and the world’s largest humanitarian organization addressing hunger and food insecurity. Historically, the organization feeds more than 100 million people in about 80 countries each year.

Lander’s contribution—along with colleagues’ contributions—led to a tremendous honor. This year, the 2020 Nobel Peace Prize was awarded to WFP for “its efforts to combat hunger, for its contribution to bettering conditions for peace in conflict-affected areas and for acting as a driving force in efforts to prevent the use of hunger as a weapon of war and conflict.”

“Something we’ve seen in areas affected by conflict is that food can lead to peace,” Lander said. The UN must negotiate with various state-backed organizations and non-state actors to help local staff feed internally displaced populations, as in Syria.

The Norwegian Nobel Committee has decided to award the Nobel Peace Prize for 2020 to the World Food Programme (WFP) for its efforts to combat hunger, for its contribution to bettering conditions for peace in conflict-affected areas and for acting as a driving force in efforts to prevent the use of hunger as a weapon of war and conflict…

In September 2020, Lander was promoted to WFP’s Global Deputy Director of the Emergency Operations Division. In this role, Lander oversees and coordinates WFP’s response to complex emergencies in conflict zones, ensuring that regions suffering from food shortages receive the resources necessary to avert famine.

Lander grew up in the Tri-Cities with parents who took him on trips around the U.S. “There was a sense of adventure that I picked up on,” he said.

While at PLU, he participated in Model UN and studied Chinese abroad on a one-year exchange program as part of his double major in Chinese Studies and International Relations (now Global Studies). The time abroad was integral to forming his future path.

“After spending time in Southeast Asia, I realized I wanted to find a career that would allow me to travel internationally,” Lander said. “I realized I was  well-suited to that kind of life, and the experience triggered a deeper appreciation of international politics.”

After graduating in 1989, Lander moved to Hong Kong with his future wife, whom he met in China—she was on a similar one-year study abroad program through her UK-based university.

After a brief period at the US refugee resettlement program, Lander was hired by the UNHCR (UN High Commissioner for Refugees) where he worked for 20 years, responding to refugee crises around the globe. Along the way, he earned two master’s degrees—one in development management, and another in international humanitarian law and human rights law.

Lander then embarked on an 11-year-long career with WFP, including emergency coordinator roles for Northwest Syria and in Central Sahel (Mali, Burkina Faso, Niger). He also spent four years as the WFP’s deputy director in Geneva, Switzerland, where he helped develop and launch the Global Food Security Cluster in 2010.

In September, Lander began working as WFP’s Global Deputy Director of the Emergency Operations Division. Recently, in addition to Syria, emergencies have included the humanitarian crisis in Yemen, and disasters in the Democratic Republic of the Congo, Ethiopia, Northeast Nigeria, and South Sudan—along with the COVID-19 pandemic.

Despite the immense challenges, Lander remains inspired by his work and motivated to do more. “It’s the best job I’ve ever had,” he said. “It’s an interesting dynamic, and I’m working with great colleagues who are very dedicated and committed to humanitarian work.”

The Nobel Peace Prize is also “a huge recognition of what we’re doing, and came as staff struggled to come to grips with a new way of working, due to COVID-19,” he said.

COVID’s health and economic impacts have more than doubled the world’s food insecure population—from 100 million to 270 million people. In Latin America, there are three times as many individuals seeking food assistance as experienced pre-pandemic, and African nations have seen a rise between 90 and 135 percent.

“People were in desperate situations,” Lander said, explaining that the recent rise has required a massive response from WFP to maintain operations and scale-up where possible. As David Beasley, WFP’s head noted in an article published by the UN in June 2020, “food is the best vaccine against chaos,” until the medical vaccine is widely available.

In a typical year, Lander spends up to 30 percent of his time on the road, but the pandemic curtailed travel. Lander is still going into the Rome office, which strives to support colleagues at the in-country offices and regional bureaus through allocating resources, deploying staff, and coordinating across organizational divisions. Among WFP’s 19,000 employees, about 90 percent work in the field, relying on calls and video meetings.

Though Lander misses the travel, during the pandemic he has drawn on his previous experiences in countries around the world. “Having spent time in the field gives me the motivation to use my position to make sure colleagues have what they need to do their job and work in often very tough conditions,” he said. “COVID has had a major impact on the communities we serve and our ability to respond. But we’re drawing lessons learned from COVID in the last year to help us plan for the future, as this is likely just the beginning of pandemics.” 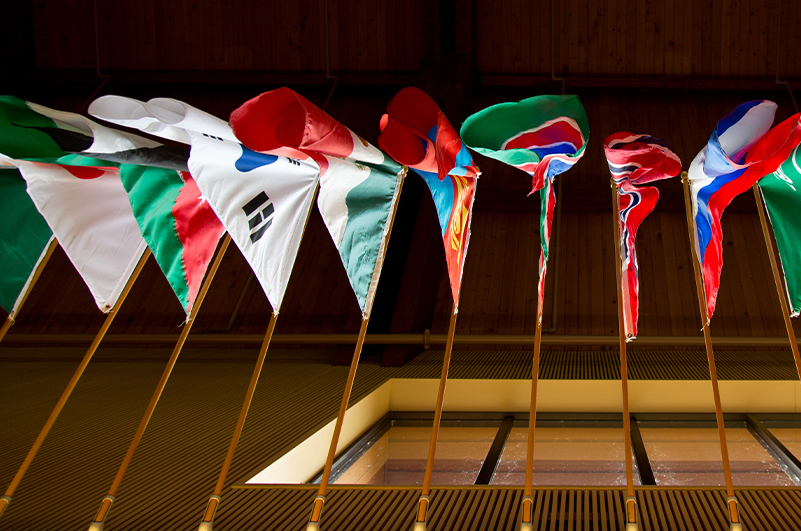 PLU’s Global Studies Program educates students to engage critically and actively with contending perspectives on global issues, their origins, and possible solutions to global problems drawing on methods and perspectives from multiple disciplines.

For students and alumni who are interested in a potential UN career, Lander suggests delving deep into the UN’s fundamental mandate documents. As well as spending time abroad and considering an internship within the UN system.

“In this kind of work, particularly in the WFP and UNHCR, you spend time in difficult places where refugees are arriving or the internally displaced are sheltering,” Lander says. “There will be conflict or some other form of insecurity and disaster. You need self-awareness and resilience because the normal things you lean on to support yourself are just not there. The living conditions are rough, so it’s good to try to get that exposure beforehand. It’s not for everyone.”

He also points out that UNCR and WFP employees must move every four years. After serving in a role for that period of time your current position is advertised, and you then apply for other jobs within the organization.

The positions may require flexibility in location and job assignments. “This can have big implications for families,” he points out. Now is the second time Lander and his wife have been apart during his career. Lander lives in Rome, but his wife—who works at another UN agency—and 14-year-old daughter are currently living in Geneva. He commutes the hour or so by air to see them whenever possible.

U.S. based changemakers hoping to make a difference could raise awareness and increase advocacy on the issue of global hunger, he recommended.

“Our executive director is calling on billionaires of the world—many U.S.-based—to start extending their thinking to support populations,” he said.  “We’re looking at famine-like conditions for almost 30 million people in 83 countries, right now. We need about 5 billion dollars to respond comprehensively in 2021 alone.”

Donations are an investment in resolving issues now, rather than waiting for the world to head in the direction of war and further conflict, he noted.

“It’s an easy calculation to make,” he said.