Saving the World with a Starship

Saving the World with a Starship 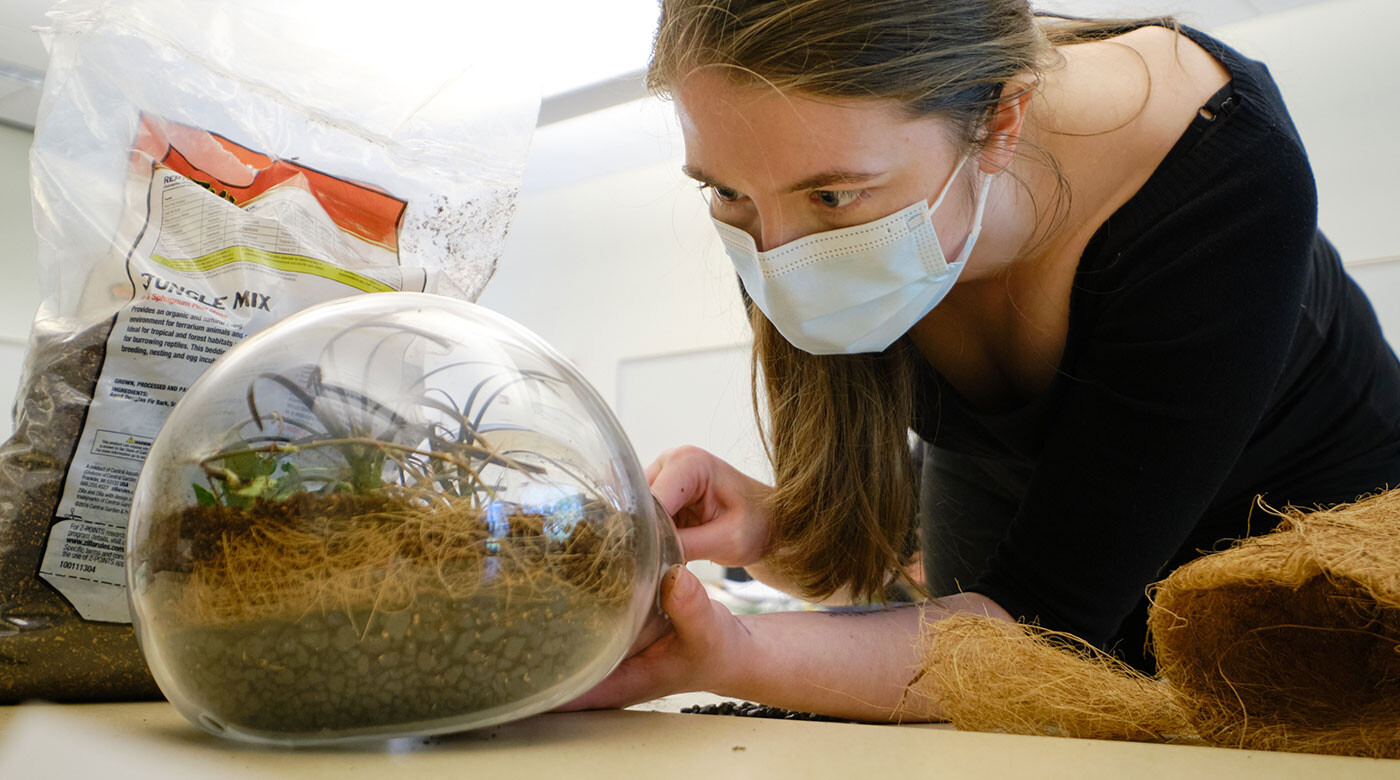 On day one of PLU Professor of Mathematics Daniel Heath’s Designing a Starship class, students have no idea what they have signed up for — and that’s exactly how Heath wants it.

The course is part of PLU’s International Honors Program (IHON), which means it is specifically designed to explore a topic through multiple academic departments and subjects. PLU’s IHON web page explains that the courses “use multiple lenses in order to overcome the blindness that comes from insisting upon just one.”

While Heath’s class is advertised as a starship design class, the course is actually a multi-disciplinary exploration of the current state of planet Earth and the issues facing humanity.

“This is a course about asking big questions and pursuing insightful answers,” Heath writes in the class syllabus. “Although we will be using some scientific methods of inquiry and exploring scientific ideas, this is not a science course. As we work to design our starship, we will find that many of the lessons we learn can be directly applied on Earth.”

"(The goal is) to get students to really see some of the harm that our society is doing so that they can’t really ignore it and live the same way they have been."- Professor Daniel Heath

In the first few weeks of class, Heath’s goal is to convince students that they are actually building a starship. It’s the most important part of the course because the starship concept forces students to think beyond their assumptions. When Heath was designing the class back in 2016, he asked people what they thought were the most damaging things humans were doing and how they would redesign those systems.

“I noticed people would get stuck on the fact that ‘This is just the way it is,’ ” Heath says. “The starship, and getting students to believe they are designing it, is essentially a trick to get them out of that box of ‘This is how things are.’”

Over the first three weeks, students tackle the main issues in the design of a ship, such as a means of propulsion, a sustainable power source for the 1,000-year-long journey to another star, how to create artificial gravity, and how many people to bring aboard so that the genetics of those on board can be uncompromised in future generations. Next, they discuss the challenge of how to feed the population using a self-sustaining biosphere. Students then build their own self-sustaining terrarium inside a glass jar and seal it to represent the conditions that would be present on the ship.

This project was a favorite for many of Heath’s students, including mathematics and physics double major Matthew Helmer ’24. “It was the most hands-on part of the class, where we researched and experimented with how to make an artificial water cycle to allow plants to flourish,” he says. “We saw an aspect of the starship design process that secretly linked back to our experience on Earth — what a life cycle in a mostly closed system, open only to sunlight and its energy, looks like. We got a better feel for the balance and delicacy of life.”

Like Helmer, it was during this portion of the class that Rae Hyra ’22 realized that maybe designing a starship was not the sole purpose of the class. Hyra recalls that, at first, she was scared she’d be the least smart person in the room, but soon discovered the physics and engineering aspects explored in the first few weeks of the class were not the important concepts. “Sure, the starship needed fuel, life support, and artificial gravity, but what about food? Livestock? Clothing and music? Body modification and medicine? What about the crew themselves? Who would be selected, and how?” Hyra, a music major, recalls. “It didn’t take me long to realize that the class was just disguising itself as a thorough, analytical look at our current lifestyles, personally, societally, and globally.” 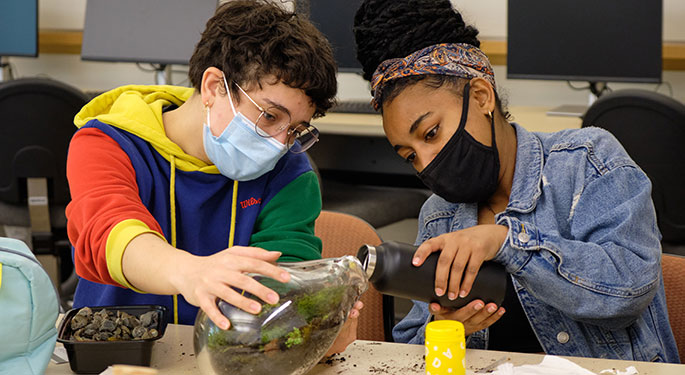 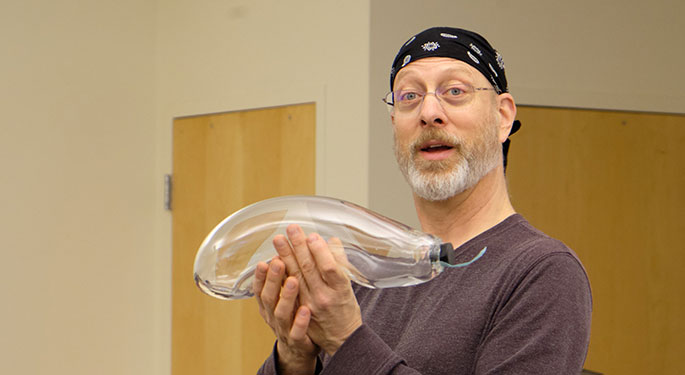 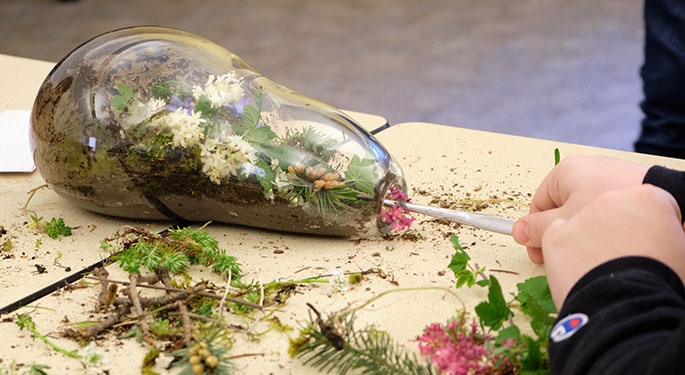 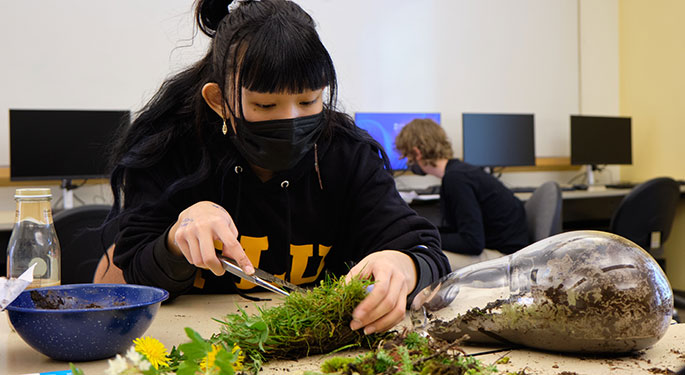 Just as students are coming to these realizations, Heath continues through one more unit on manufacturing and industry on the starship, which leads to conversations about consumerism and overconsumption. Students then pick an item that will need to be manufactured on the ship and decide how to make it without damaging the delicate ecosystem. Last year, one group took on manufacturing a turbine for nuclear power, since nuclear is the only known power source for a ship of this size for this amount of time. Another group chose glasses because they all wear them and knew they would be needed.

When this unit on manufacturing ends, Heath confirms that the “starship” they were designing is in fact a representation of the Earth — a tiny bubble in the middle of space that they are all living on. The real assignment now is to redesign an aspect of the current way of life and record a 10-minute TED Talk to inspire people to redesign it. The final exam is watching the TED Talks and discussing the redesigned aspects of life.

For some students, the course is life-changing. Heath says that in 2017 one student stood up on the last day of the class and asked, “Has anyone else been completely blown away and not quite sure how to live their life now?” Multiple students raised their hands. Last year, multiple students came to Heath and said they didn’t know where to go from here.

“For me, that was the goal,” Heath says. “To get students to really see some of the harm that our society is doing so that they can’t really ignore it and live the same way they have been.”

And it’s not only the students who are having revelations. Heath has discovered that this fictional world created by imagining a starship allows for conversations, and disagreements, that are otherwise impossible. For example, when he asked two different biology professors about creating a biosphere, one was adamant that it had to be based on a tropical climate in order to maximize the diversity of species. The other was convinced it had to be a temperate climate in order to be hardy enough to survive.

“Those are both great answers, but they were polar opposites and we have to be okay with that,” Heath says. “When we can sit in a classroom and have discussions in the fictional world of a starship, we can actually listen to each other. I don’t know how to recreate that in the real world. But just imagine what we could accomplish if we could.”