Greta Thunberg is a 16 years old climate change activist in Sweden. In August 2018 she started this global movement, although her concern was personal and local. On August 20, 2018 she sat outside the Swedish Riksdag (Parliament) with a sign that read “Skolstrejk för klimatet” – School strike for the Climate. She wrote on Twitter that she was fed up with grownups destroying her future and declared that she would be on strike every Friday until Sweden’s election day on September 9, 2018 but she continued doing them.  Her actions, words, and presentation went viral and inspired Fridays for Future, where now there are students doing school strikes about climate change inaction all over the world now: including in Japan, all over Europe, Canada, the United States (including in Washington State), Nigeria, Mali, Uganda and so many more.

The SCC’s student employees, Coral Hunter and KD Williams developed an exhibit based on Greta Thunberg and the school strikes she has inspired. They have researched Greta Thunberg and Fridays for Future, planned, and installed an exhibit in the SCC. We encourage you to come see the exhibit as it bears witness to the impact that young people are making in the world, both on climate change and in documenting and publicly presenting this impact. The SCC welcomes you to come and see the work that the world’s and PLU’s young people are doing here and around the world.

There is a selfie station for you to take photos at! Upload them with the hashtags #youthforclimate #fridaysforfuture #schoolstrike4climate #scancenterPLU 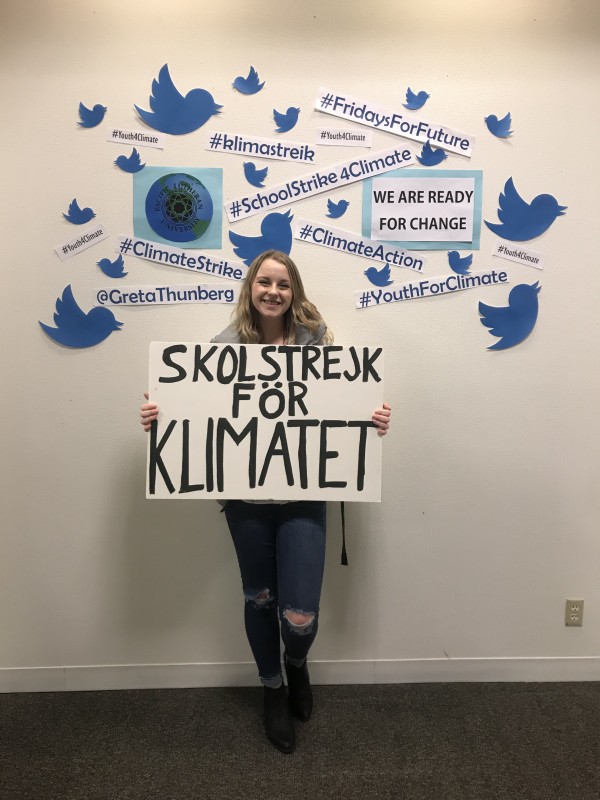