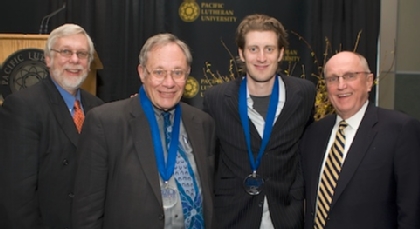 This year’s recipients were President of the Trade Development Alliance of Greater Seattle, William S. Stafford, and Winter Olympian Joey Cheek.“William B. Stafford is an extraordinary individual dedicated to enhancing and strengthening international understanding throughout the Puget Sound region,” said Neal Sobania, executive director of PLU’s Wang Center for Global Education.PLU President Loren J. Anderson presented Stafford with this award for a life of service promoting international understanding through trade, commerce, culture and the arts, and for his commitment to establishing the Puget Sound region as a focal point for the rest of the world.”Without a doubt, the dedication Bill Stafford has shown in creating greater global understanding can be matched by very few,” Anderson said. “He is a true leader in bringing our world closer together.”

Stafford has been instrumental in assisting PLU faculty design and promote global education programs, offered exceptionally valuable advice in the planning of the Wang Center’s biennial International Symposia and, from the founding of the Wang Center, served with distinction on its advisory board, Sobania said.

As president of the Trade Development Alliance of Greater Seattle, Stafford has led the organization in fostering global understanding and international relationships in the Greater Puget Sound area. He has led by:

–    Helping to forge ties between institutions of higher education and overseas partners, especially working with universities and colleges and “Study Washington” to attract international students.
–    Assisting numerous corporations, not-for-profits, and individuals build worldwide connections and communications with similar overseas organizations, including planning 17 International Study missions that have been taken by more than 1,500 Puget Sound leaders in various parts of the world.
–    Introducing the world to the Puget Sound region by hosting more than 1,200 visiting delegations and international leaders to our region.
–    Promoting board relationships with China, Washington State’s more important trading partner, and with many other parts of the world.
–    Working to foster cooperation and to enhance contacts and relationships for South Sound businesses.
–    Assisting in a variety of ways many arts and cultural organizations ranging from the Seattle Arts Museum and the UW World Series to the International Children’s Festival and the Children’s Museum.

“In all he does Bill Stafford lives the mission of the Sister City Program International to ‘Promote peace through mutual respect, understanding and cooperation – one individual, one country at a time,’” Sobania said.

He did so, while serving as the Chair of the City of Seattle’s Sister City Committee and serving for three years on the national board of Sister Cities International. He continues that work now as president of the Trade Development Alliance of Greater Seattle.