MBA grads hit it off with giving kudos online

Who doesn’t like props? That’s what Ryan Hart thought last year when he wrote a business plan for a local business award Website.

Hart, 25, who completed his MBA at PLU, decided, why not try a local version of this idea? 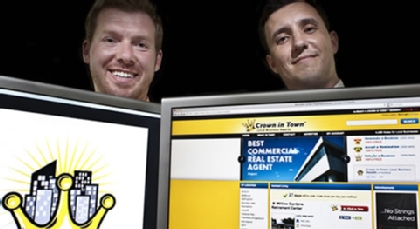 The result, with the help of his fellow MBA grad, Lee Pogue ’09, is the Crown in Town Web site. Since the site went live last year, it’s garnered 2,400 businesses, and 9,400 active voters who have given out 340 awards. Crown in Town recognizes and honors businesses who embody the trust and reputation as set forth by the local chamber of commerces. The awards don’t carry any monetary perks . But it does offer the allure of being recognized for good work, and frankly, for the businesses to shamelessly promote themselves. The recognition for a job well done is reward enough for businesses to join in and take part in the site, Hart said.

The idea has been such a success; it won the PLU Business Plan Competition, sponsored by the Herbert B. Jones Foundation,   earlier this year. The competition is open to PLU students or alumni who have started a business that’s less than a year old.

Since Hart and Pogue first came up with the idea in April of 2009, then launched the site with $7,500 in start up money, it has taken off and is now in the black.  Hart works full time on the business, which he soon hopes to take a national platform in October, while Pogue continues his job as a sergeant in the Fort Lewis Army base.

Currently, the Puyallup, Lakewood, Bonney Lake and Fife Chamber of Commerces have taken part in the Crown in Town Web site. About 33 cities in six states are represented on the site in total.

Both Hart and Pogue credit the connections they made during their two years in the MBA program as key to the successful launch of the business.

“It was local and convenient,” Hart said. “I devoted two nights a week for years. The PLU MBA program gives you confidence in yourself. And the great thing about the program is the personal relationships you develop.”

“The MBA program changed my perspective on things, ”  says the father of two girls. “It’s well worth the time and money and I’d recommend it to anyone.”

Both praise the study-away portion of the program, which takes MBA students to a foreign country on a 10-day trip to review and learn from business practices there. Both Pogue and Hart went to China during their MBA experience. Their class visited a Toyota plant, a builder of some of the biggest yachts in the world, a steel plant and a beer factory. No word on whether free samples were given out at the last stop.

“I would suggest taking that trip as soon as possible during the program” Hart said. “That international experience is amazing.”