Crime of My Very Existence

Michael Berkowitz first came to Professor Robert Ericksen’s attention about 10 years ago, when he first spotted the aspiring Holocaust scholar at the Ohio State University. 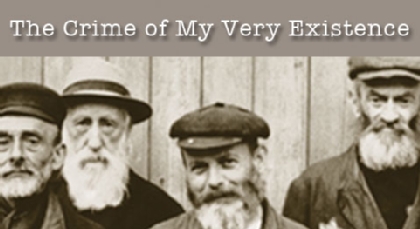 Prof. Michael Berkowitz will speak at the fall lecture in Holocaust Studies in November on his recent book. The next Holocaust Conference will be March 17-19, 2011 on the PLU campus.

When the opportunity came to bring Berkowitz, now a professor and the director of the Holocaust Program at the Department of Hebrew and Jewish Studies at the University College London, to PLU for a lecture, Ericksen took it.

At the PLU Fall Lecture in Holocaust Studies on Nov. 11, Berkowitz will speak from his book, The Crime of My Very Existence. The event is free and open to the public and will take place in Xavier Hall at 7 p.m.

The work investigates a rarely considered yet critical dimension of anti-Semitism that was instrumental in the conception and perpetration of the Holocaust: the association of Jews with criminality.

Drawing from a rich body of documentary evidence, including memoirs and little-studied photographs, Michael Berkowitz traces the myths and realities pertinent to the discourse on “Jewish criminality” from the eighteenth century through the Weimar Republic, into the complex Nazi assault on the Jews, and extending into postwar Europe.

Berkowitz also studied the Jewish reaction to the propaganda machine, including organizing legal defense funds, creating committees to help Jews immigrate to Palestine and launching a public relations campaign of their own, Ericksen said.

Berkowitz also has researched on how Jews define themselves as well as following the careers of several well-known Jewish boxers in the early 20th century, Ericksen said.

Berkowitz received his bachelor’s degree from Hobart College and his masters and PhD from the University of Wisconsin. Berkowitz has held fellowships at the Hebrew University of Jerusalem, Tel Aviv University, the University of Judaism in Los Angeles, the American Jewish Archives in Cincinnati, and the Leo Baeck Institute in New York.

Professor Berkowitz’s current research interests include modern Jewish identity formation and political self-representations, 1881-1948; art, politics, and culture; the politics of religion in Mandate Palestine; perceptions of social deviance among Jewry from early modern times to the present; Jews and German culture; ties between charity and nationalism; and modes of understanding and misunderstanding the Holocaust.

The conference also brought more than a dozen international Holocaust scholars to campus and included a reading by former Regent Kurt Mayer from his book, which spans his life, from living in Nazi Germany as a child to the success he found as a businessman in the Puget Sound area.