Rick Barot, assistant professor of English at Pacific Lutheran University, was a political science major as an undergraduate before accidentally discovering his passion for poetry. 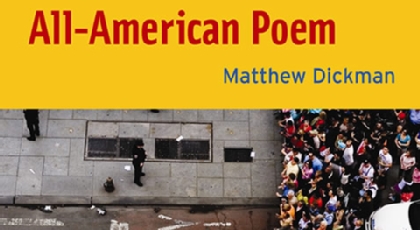 Matthew Dickman came to PLU as part of the Visiting Writer’s Series.

He hopes students will gain a similar experience from the annual Visiting Writer Series.

“You never know what you will learn from an event,” Barot said.

Barot discovered his passion for writing when he was forced to attend a poetry reading for one of his classes. He said PLU’s Visiting Writer Series, which is currently in its sixth year, can help students discover similar hidden passions.

“It expands [students’] sense of what the world is about,” Barot said. “It introduces possibilities within yourself.”

The Visiting Writer Series is an annual speaker series that welcomes accomplished writers, authors and poets to campus. It gives students the opportunity to experience the writers’ frame of reference firsthand and go beyond the face value of a piece of writing.

Jason Skipper, assistant professor of English, and co-founder and organizer of the series alongside Barot, said the authors who participate in the series present work that resonates with the students.

“We bring highly regarded, published authors whose work we know will connect with students at PLU and speaks to the university mission,” Skipper said.

The events consist of readings and question-and-answer sessions with each of the featured writers. Skipper said turnout is consistently large, with nearly 60 to 100 students in attendance for any given event.

Both Barot and Skipper said the series doesn’t just cater to English majors, and anyone can benefit from attending.

“It’s not just something for the English department,” Skipper said. “I think people forget how stories are engrained in our lives.”

Every student at PLU seeking a well-rounded education can utilize these events, Skipper said, and can learn to appreciate and recognize storytelling as a vessel for understanding the world.

“It helps to remind people that stories exist everywhere,” Skipper said. “There’s something very educational. People forget the beauty in that.”

Barot agreed with the sentiment, and said it is events like the Visiting Writer Series that contribute to a multifaceted, liberal arts education.

“A lot of education that happens at a university campus also occurs outside the classroom,” Barot said. “Visiting Writer Series gives students access to knowledge outside the prescribed arena in the classroom.”

Barot said topics addressed in the various events include sexuality, diversity and lifestyle, just to name a few. The series has grown in recent years from a localized showcase of authors to a wider variety of noteworthy writers from different disciplines.

Skipper said getting well-known writers isn’t too difficult because of the interest the PLU community continues to show in the series.

“We sell [the writers] on the students,” he said. “PLU students are readers and writers and they are genuinely interested.”

One of the recent speakers, Skipper said, blogged about how engaged PLU students are, and that is what keeps writers coming back.

Barot said he hopes PLU students realize the benefits, and hopes students see the series as one way to really get what they pay for with their tuition dollars.

“It’s important that students go to these events because the viability of the series is measured by student interest,” he said. “We deeply care whether people show up.”

The next event featured in the series is scheduled for Nov. 17 at 3:30 p.m.  in the Regency Room. It will feature poet Matthew Dickman, who will read from his collection “All America Poem.”

Skipper said with Dickman, and all other writers featured in the series, it is a unique experience to hear the work coming directly from the person who crafted it. Even for sheer entertainment value, Barot and Skipper both highly recommend people utilize these opportunities.

“We figure out who we are through stories,” Skipper said. “It’s how we come to understand the world.”