When Andrew Pogue ’14 strolled into Lagerquist Hall, he stopped, looked around and listened.

The 30-year-old transfer student from Highline Community College knew that Pacific Lutheran University was the place for him. 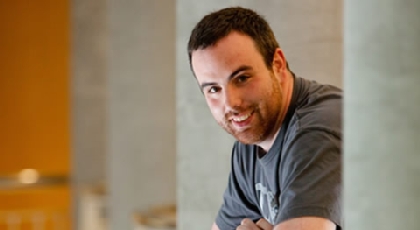 Andrew Pogue ’14 transferred from Highline Community College, knowing PLU was the perfect place for him. (Photo by John Froschauer)

“I just walked into that hall and I knew it,” said Pogue, who plans to become a music teacher once he graduates. “I knew this was going to be my school.”

Pogue’s journey to PLU actually began when he was a student at Pasco High School and his love of music developed. The 2,400-student high school was not socially kind to Pogue, or anyone else who wasn’t a jock, and he dropped out and later earned his GED. He worked at the Seattle Symphony and then for Amazon.com for awhile. In 2009, he started up his college career again when he registered at Highline Community College in Des Moines, Wash.

But it was the music program that eventually drew Pogue to PLU. When he arrived at PLU, he immediately tried out and won on a slot in the prestigious Choir of the West.  Pogue had thought he might have to wait a year to earn a spot on the choir. But when the choir’s leader, Prof. Richard Nance, called him with the good news, Pogue said he was so overwhelmed he had to pull over on the freeway to let his good fortune sink in.

Pogue’s advice to other transfer students includes checking out the transfer requirements carefully, and look at picking colleges early in the admittable process. He also stressed that “it’s never too late to go back to school.”

Don’t let your age be a deterrent, he stressed.

“I wondered if I’d fit in, and this place has been most welcoming,” he said, adding that he lives in Kriedler Hall, which is mostly filled with upper classmen and older students.

The financial aid and counselors at PLU were terrific, he said.

“The financial aid package they gave me was great, and made PLU very affordable,” he said. “I couldn’t have been happier with it. Definitely, they will work with you.”

And after he launches into the job market in 2014? He plans to become a music teacher in a high school.

“I loved my high school choir teacher,” he said. “I really want to do this. I would not have survived high school without music.”

He plans to reach out to high school students who, like him,  teetered on the brink in high school.

“I want to help students that are on the edge, who might be in danger of dropping out,” he said. “I want to tell them that its’ going to get better and to stick with it. I think I have a unique perspective that I can share with others.”