As part of the PLU Chinese Studies Program lecture series, Daniel A. Bell will visit campus to examine the revival of Confucianism as the moral foundation for political rule in China. 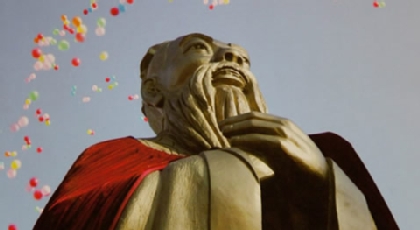 Confucianism is making a comeback in Chinese debate about moral and political foundation. Below is a video with the last lecturer in the series, journalist Martin Jacques.

There’s a desire to be a good neighbor, he said.  Bell will speak about “Reviving Tradition in China: Towards a Progressive and Humane Confucian Ethics.”

Bell will speak at PLU from 7 to 9 p.m., Thursday, Nov. 18 in the Scandinavian Cultural Center in the UC.

The program is part of the Chinese Studies Program’s lecture series. The last lecturer was journalist Martin Jacques. Bell is a professor of ethics and political theory at Tsinghua University, in Beijing. His latest book is China’s New Confucianism: Ethics and Everyday Life in a Changing Society (Princeton University Press; new edition, 2010).

Bell’s book addresses how communism in China has lost its capacity to inspire the Chinese. And what’s replacing it may very well be Confucianism.

He’ll explore the reasons for the Confucian revival in China and discuss his proposals for a more progressive form of Confucianism that offers a compelling alternative to Western-style liberal democracy.

In American media, the story of today’s China is only half told, Youtz said. There are rightful criticisms, but there are also untold successes, such as economic expansion and even environmental advances that think of the world in the long term, rather than in the immediate. There are even examinations of what a Chinese free press should look like.

It may stem from the Confucian traditions of Chinese society, where the questions asked aren’t about immediate gain or the individual, but rather looking at the long term and addressing the needs of other people, Youtz said.

“It may surprise a lot of Westerners,” Youtz said, “But a lot of these things are being discussed by the Chinese Communist Party.”

The debates ask what the Communist Party will look like as the century progresses and what role China will play in the world of tomorrow.

Because these are such important discussions not just for China, but the world, hearing them in the U.S. is vital,Youtz said.

“I find it terribly important to have some voices here that are from China,” Youtz said. “I think Daniel Bell says some quite unique and surprising thoughts that I hope will allow Americans to humble down a little and listen to some very interesting thoughts from across the world.”