Mike Vermuelen always liked rocks. Now he gets to study them up close in Antarctica.

In a lab littered with Hostess snack bars and French fry wrappers, geosciences student Mike Vermeulen ’12, turns to his computer and pops up a map of Antarctica.

He then points to a grid in the upper part of the frozen continent. 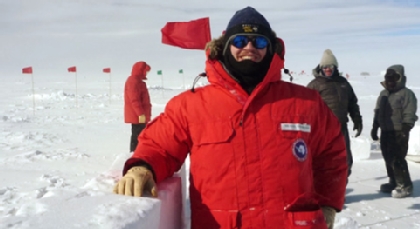 Mike Vermeulen has always been fascinated by rocks and dinosaurs. This last winter, he travelled south to Antarctica to study deglaciation of rocks. (Photo by Claire Todd)

There is where the PLU junior, and his geosciences professor, Claire Todd,  will spend 40 days, including Christmas, as they study deglaciation – or in other words, how fast ice has been melting – over the last millennia. They will arrive back at the home base for most researchers in Antarctica – McMurdo Station- around January 22. Then they will head home and arrive at PLU in early February. Later, they will study all the rocks they have collected.

“This long term look will give us a context of the recent changes we’ve been seeing,” said Vermeulen, who at first thought of becoming a nurse when he arrived at PLU. And he was interested in playing for the soccer team.

But his love of rocks and geology soon took over. As a kid, “I’d be the one collecting rocks. Pretty soon I had giant plastic bins filled up with rocks at home,” he said.

“I really never thought I’d have an opportunity like this, said Vermeulen, 22.

“As a kid I just had a general interest in rocks. I would collect ones that I found interesting while playing outside,” he said of his early interest in geology ” Also I would get books about minerals and gems/paleontology from the library.”

Yes, he was also the kid that fell in love with Jurassic Park.

Once Vermeulen graduates next year, he plans to go on to graduate school. But for now, he’s just focused on his Antarctic adventure. And those rocks.