Talking trees, floods, kites, it’s all in a day’s work 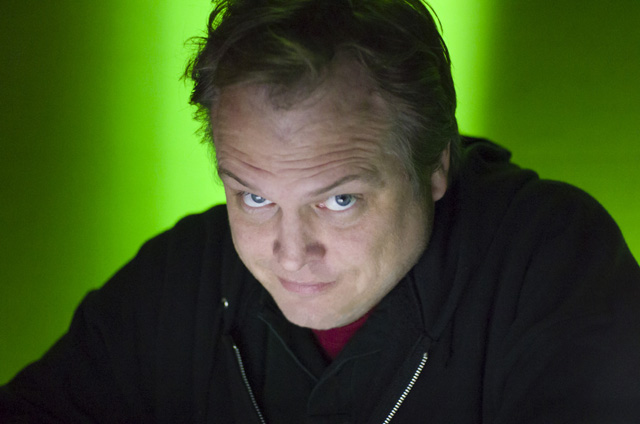 Todd Sheridan Perry ’92 worked on many of the Gollum scenes in the second Lord of the Rings movie.

Remember the scene in the “The Lord of the Rings – Two Towers,” where outraged forest guardians, called Ents, descend on the tower where the evil wizard is trapped? The walking, talking and very large trees tear down a dam, and floodwaters surge into the valley to trap the wizard, put out the fires and drown a few Orcs in the process.

After all, he designed it.

Reading through Perry’s resume is like a browsing through titles of the most popular movies on Netflix. As a computer graphics wiz for feature films and television, he has worked on 2012, The Kite Runner, Jeepers Creepers and The Triangle, a SyFy Channel miniseries for which he won an Emmy in 2006. More than 55 movies and projects are listed on his resume, some 18 years after he took his PLU fine arts degree to Hollywood. While a new LOTR film The Hobbit, is in preproduction mode in New Zealand, Perry said this month that he has no plans to pull up roots again and camp out on another Lord of the Rings set. He has too much going on here in the Pacific Northwest with family and work commitments.

Perry knew that he always wanted a career in digital effects. He just had to figure out how to get there.

Since he first saw Star Wars in 1977, at age eight, Perry has been fascinated with visual effects. That movie set his career path. He wanted to work in movies. And he wanted a part in creating those cool, blow-you-back-in-your-seat effects that first captured his imagination and took him to a land, far, far away.

“I was always drawing stop-motion movies and little drawings and cartoons in the sides of my textbooks and stuff like that,” he said. “And I was always borrowing my Dad’s video camera.”

In high school, Perry took every art class he could find. And when he ran out of art classes, he started crafting coursework through independent study. He did the same thing at Pierce College, and then transferred to PLU. It was here his future career got on track.

Perry was able to prepare himself for a successful career by teaching himself how to edit while working at PLU’s student-run television station KCNS. He tailored his coursework and his internships to help him reach his goal. To this day, Perry still credits his professors, specifically Bea Geller, associate professor of photography and digital imaging, with helping him craft his coursework.

“The coursework from Bea not only gave me a technical foundation, but an eye for the subject matter, composition and color,” he said. “The computer is just a tool to create art work; it’s not any different than pencil or paint. It’s a canvass.”

After PLU, Perry headed to Los Angeles. He had no job prospects.

He figured he’d give it a go for three months. If nothing panned out, he’d go back to school for his master’s degree. But as it turned out, it did “pan out” quite nicely. He first designed the graphics for a game based on the children’s cartoon, Madeline. Then Perry found out about a series of movies that were being developed out of the J.R.R. Tolkien trilogy.

The rest is history.

“The entire experience was fantastic,” said Perry of his time working with Peter Jackson and the Lord of the Rings creative team. Not only did he help the Ents attack the tower, but he helped the lighting team with Gollum, and he created some of the larger battle scenes.

Perry is working for the next six months in Vancouver, B.C., on special computer generated effects on the next “Final Destination” movie.

“Make that the final, ‘Final Destination’ movie,” quipped Perry during a break in his work.

As wild as some of the scenes in Two Towers, or Final Destination seem once they reach the screen, Perry notes that all of his work happens in a rather tame office atmosphere in front of a computer. That doesn’t mean he isn’t on the set.

“I’ve been on the set making sure they don’t shoot the scene in a way that would screw us up,” he laughed.

As good as his work is, Perry stresses that good visual effects can’t cover for a bad script. The story has to come first. Most, if not all, successful movies have a storyline that hits the audience at an emotional level – one that crosses cultures and backgrounds.

As for advice to those who want to follow in his very focused footsteps?

“You need to follow your bliss and what will make you happy,” he said. “Ultimately, everything else will fall into place. Stop worrying about how to make money and make a living. If you follow what you love, everyone will recognize your talent and you’ll get paid for doing what you love.”