In a decades-old video shown in the UC this week, Archbishop Desmond Tutu – the keynote speaker at the May 13 “Be the Spark” event – listened carefully as speaker after speaker came before him, telling of beatings and murders that marked apartheid in South Africa. 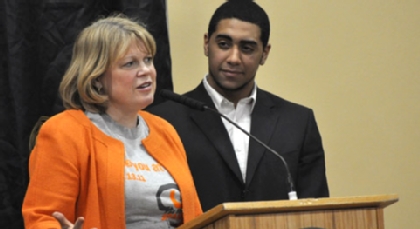 MaryAnn Anderson, chair of the Greater Tacoma Community Foundation board, says “We are now calling Parkland ‘Sparkland.'” Beside her at the podium is Mycal Ford, ’12, who acted as moderator during last Tuesday’s lecture. (Photo by Thomas Nelson)

At one point, during those South African Truth and Reconciliation Commission hearings in 1995, Tutu simply put his head in his hands and cried. Later, Tutu said of his grief – “I couldn’t carry all that emotion around with me.” Yet he added that what happened in South Africa now shows “that no situation is devoid of hope.”

Tutu will bring these messages of nonviolence, forgiveness and hope to the Tacoma Dome in two weeks as he takes the stage as the keynote speaker in the “Be the Spark” event sponsored by the Greater Tacoma Community Foundation, Pacific Lutheran University and the University of Puget Sound.

In preparation for this event, PLU’s community gathered April 26 in the UC to learn more about Tutu’s background and the events that shaped the man who became a critical figure in the protests against apartheid.

Neal Sobania, executive director of the Wang Center for Global Education, also showed a series of videos about Tutu, South Africa and the creation of apartheid. The roots of the separation of races landed with the Dutch immigrants who came to the southern tip of Africa in the 17th century. The actual doctrine was established by the National Party in 1948.

The apartheid was a legal system that curtailed the rights of the majority ‘non-whites’ in South Africa under the rule of the white minority. Tutu was born in 1931, and at first wanted to become a doctor, but due to the poor quality of the schooling offered to South African blacks, he switched to become a teacher, and then a minister. He received his master’s degree in theology from King’s College in London and returned to minister in South Africa in the late 1960s.  In the 1970s, Tutu became actively involved at the frontline of the anti-apartheid movements. He was awarded the Nobel Peace Prize for his efforts in 1984.

When asked later by journalist Bill Moyers about the worst thing about apartheid, Tutu said after a moment’s thought that eventually, one begins to believe the philosophy.

“It makes one doubt that you are a child of God…after you’re subjected to this treatment, it begins to work (in your brain) and you begin to think ‘Maybe they are right,’” Tutu said.

At that same gathering last Tuesday, students from PLU and local high schools also talked about Youth Against Violence gatherings, where PLU students led discussions with high school youth about their lives and changing their communities.

Mycal Ford, ’12, said that he was surprised at how open the students in Lincoln and Washington high schools were about sharing their stories and their determination to make their communities a better place. Ford will be speaking at the May 13 event.

“Be the Spark” organizers were surprised at how PLU has embraced the message – and snapped up the tickets. All thousand-plus tickets offered to PLU students sold out within hours. So far, more than 16,000 tickets have been sold to the May 13 event, said MaryAnn Anderson, wife of President Loren J. Anderson, external relations coordinator at PLU and chair of the foundation board. As of Thursday, only 700 tickets are left, foundation members confirmed.