For the past two weeks, PLU’s Choir of the West and KammerMusikere Orchestra have been touring Germany and France, with great success.

The two groups – sometimes playing together, other times apart – performed numerous concerts at beautiful locations like Chartes Cathedral and Luxembourg Gardens in Paris. 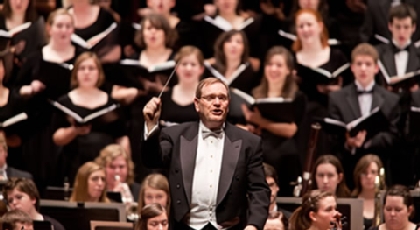 Choir of the West and KammerMusikere Orchestra toured France and Germany this summer.

In addition, the Choir of the West made a special stop at the Harmonie Festival in Limburg, Germany, where they stayed just long enough to gather-up all sorts of hardware. (Anyone bring an empty suitcase?) As part of the four-day international event, the Choir of the West took second place out of 17 groups – earning a gold medal – and the choir’s men’s and women’s earned gold and silver medals, respectively. PLU’s a men’s cappella group, PLUtonic, also earned a gold at the event.

The performers are just returning from the trip, so expect to hear more details soon. In the mean time, we can all imagine ourselves enjoying Western Europe through the eyes and ears of photographer Kelly Creedon, who captured the Choir of the West and KammerMusikere Orchestra on their tour, along with student interviews.

You can find the slideshows here. Enjoy!