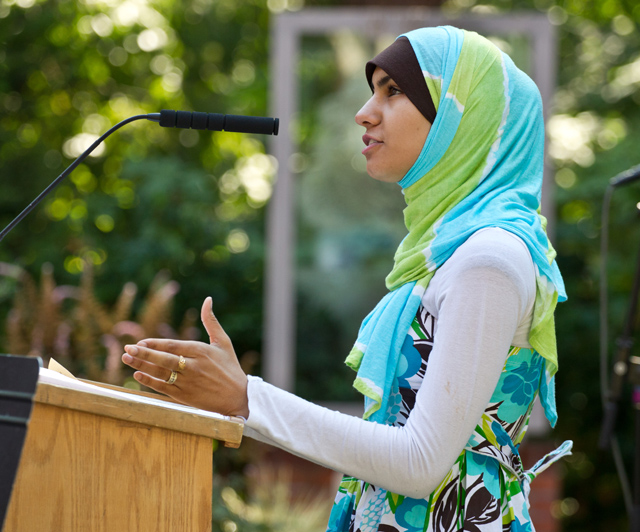 Bashair Alazadi, who helped form the Muslim Association and Allies this fall, spoke of Islam and its similarities with Christianity and Judaism at the service. (Photo by John Froschauer)

Remembering 9/11 and looking to the future

It is right to remember the tragic events of 9/11 and remember the victims who lost their lives when the towers fell in New York, and planes slammed into the Pentagon and a lonely field in Pennsylvania.

But it is more important now, to take these experiences and look ahead, said President Loren J. Anderson at a memorial and remembrance service held Friday to commemorate the attacks and reflect on what we’ve learned since.

“We need to rededicate ourselves and look forward,” Anderson told a gathering of about 100 students, faculty and staff, who gathered at the MBR amphitheater on Friday morning.

“We need to reflect on how we build in this place, a diverse and just and supportive society.”

In fact, Anderson noted, some of the most positive examples of “building a diverse community has taken place on college campuses.”

The PLU community should be a beacon of light to the world and see uniqueness as a gift, he said.

In a largely student-led service, that message was echoed again and again. Bashair Alazadi, who helped form the Muslim Association and Allies this year, pointed out the similarities between Islam, Judaism and Christianity. Alazadi ’13, a business major, noted that nowhere does the Koran condone killing innocents, and that 9-11 was a political, not a religious act of violence.

Representatives from the Secular Student Alliance, the Pan-Orthodox Organization and the Oseh Shalom Jewish Club also spoke at the gathering.

On Saturday, the commemorative events continued, as the PLU community participated in a Day of Service. Volunteers helped individuals with yard work in the Parkland community.

Finally on Sunday, the 10-year anniversary of the attacks, the first of the Richard D. Moe Organ Recital Series took place to works of “War, Reconciliation, and Peace.” PLU organist, Paul Tegels, performed various works on the Gottfried and Mary Fuchs Organ in Lagerquist Hall.