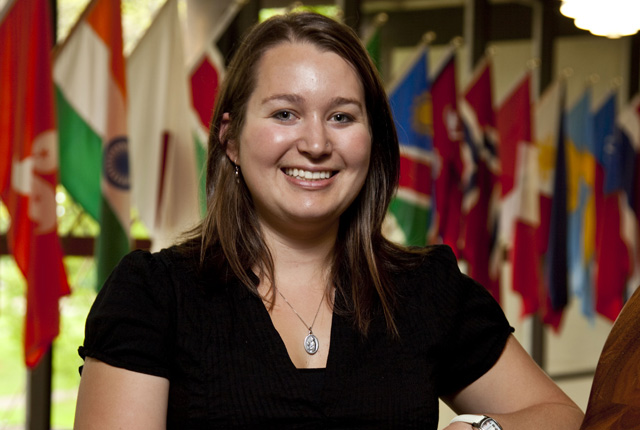 Nicolette Paso ’09 is now studying at Emory University for her master’s degree in divinity.

Nicolette Paso: A journey of discovery

For Nicolette Paso ’09, there was never really a choice.

“I did not choose to be a religion major; religion grasped me,” said Paso this year, as she began her studies at Emory University in Atlanta to pursue a master’s of divinity. “Through classes at PLU, I became acquainted with Lutheran theology, especially [the theology of] Paul Tillich.”

Paso graduated with a degree in religion and German, and after spending some time working in downtown Tacoma at a church, left last year to Germany on a Fulbright Scholarship to work with Armin Kohnle, director of the Institute of Church History at the University of Leipzig. With Kohnle, Paso studied “common chest” ordinances in the early reformation period.

“Common chest” literally refers to a locked box where donations where kept for the poor in a church.

“It was basically early social services in Germany,” Paso said. “It was the first attempt in western Christianity to establish a system of care for poor, and deciding who could receive and who couldn’t receive help. It was a precursor to the formation of modern welfare state.”

Paso is studying at Emory’s Chandler School of Theology after receiving a full tuition scholarship under the  Robert W. Woodruff Fellowships in Theology and Ministry. Looking back at her time at PLU, Paso credits her professors, and the university’s facilities and its emphasis on social justice with helping achieve her academic and personal goals. When she first arrived at PLU from her hometown of Modesto, Calif., Paso started as a business major, then switched to science and finally, to religion.

“PLU gave me a chance to see what I was interested in,” she said. “I definitely think that PLU was the foundation that encouraged me to continue my studies and the classes and profs helped me encounter ideas and things that inspired me. ”

Eventually, Paso, 24, would like to attain her Ph.D. and return to a university, like PLU, to teach.