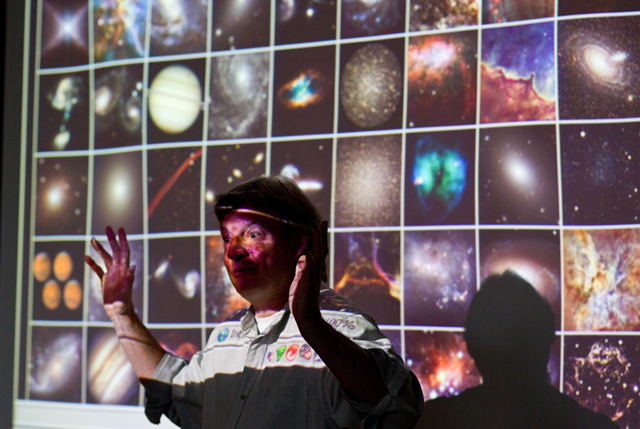 Physics Instructor, Dana Rush, talks about the Hubble Space Telescope in the community room of the GBC.

For more than a decade, the Hubble Space Telescope has been opening doors to the universe.

Through its lens, we’ve received astonishing views – from the formation of stars and planets to getting a glimpse of the impact of a comet colliding with Jupiter. Dana Rush, PLU physics instructor, presented a multimedia lecture on the Hubble Space Telescope in the community room of the Garfield Book Company last Monday.

“The Hubble Space Telescope allows us to observe the heavens at the farthest distances that are possible,” he said. “We really are celestial beings. We’re connected to the heavens and creation in a way you might not imagine.”

The lecture was part of the L.I.F.E program, which provides opportunities for mature adults, with the aim of enhancing their personal development with stimulating educational classes.

The idea for the telescope began in the 1940s. In 1990, it was finally launched into space. Once in orbit it was discovered that its 2.4-meter lens  was a fraction off, making the first images it captured slightly blurry. After a NASA repair mission effectively gave the telescope corrective contact lenses, images jumped back into focus.

“Hubble has brought so much insight,” Rush said, adding that at first, scientists weren’t sure what they’d see. What they did see was astonishing.

By using the Hubble it was discovered that at the center of galaxies, black holes exist and by focusing on a single part of space more than 2,000 galaxies jumped into view. Within the Orion Nebula, new stars can be seen being formed.

While focusing on Jupiter, a comet was discovered that was on a collision course with the planet. It gave the scientific community a chance to see what happens when it collided – and a glimpse into the scenario that killed off Earth’s dinosaurs 65 million years ago.

Jupiter is made of gases, so the collision wasn’t exactly the same, but once the pieces erupted in Jupiter’s atmosphere, each released enough energy to equal the explosion of all the nuclear warheads on Earth in one place at the same time, Rush said.

A study was commissioned to look at what would happen if a similar comet hit Earth. It was concluded that nearly a 1,000 comets came close to Earth, but the next one that would come close enough to cause any damage is thousands of years away.

This begged the question, of course, of what else is there to be discovered via Hubble?

“That’s the value of science,” Rush said. “You just never know where some of these discoveries are going to go.”