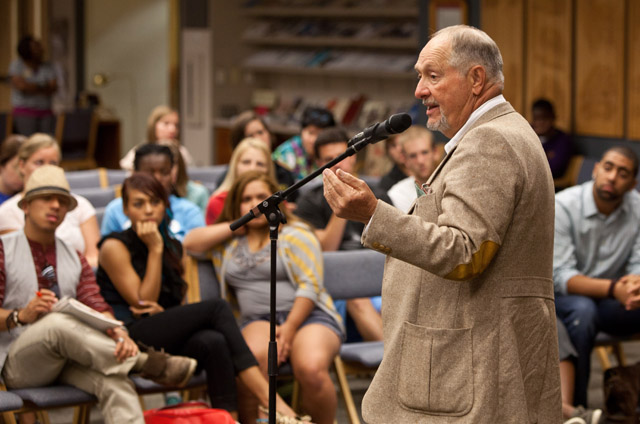 Bob Zellner spoke to students about his experiences as a civil rights activist in the 1960s as part of the kick-off event for the Diversity Center’s 10 year anniversary.

While an angry crowd piled on top of Bob Zellner like a bunch of football players fighting over a loose ball, the last thing the twenty-something college student remembered was someone kicking him in the head and the thought “this is the way I die” crossing his mind.

He then woke up in jail. Still alive, but changed. It wasn’t the last time he would end up in jail.

It had been his first demonstration as a field officer for the Student Nonviolent Coordinating Committee. It was the early 1960s in Mississippi. As a civil rights activist, he was there to lead a peaceful protest condemning the murder of an African American man whose supposed crime had been registering to vote.

Zellner, now 72, shared his story with students last week as the kick-off for the tenth anniversary of PLU’s Diversity Center. It’s a story of a white man from southern Alabama, standing up for what he thought was right and fighting the injustices of deep-seeded racism.

As a white man, whose father and grandfather were part of the Ku Klux Klan, his work as a civil rights activist was “unusual and very unlikely.”

His father, a minister, would eventual become an advocate for civil rights, but much of his extended family saw Zellner as a traitor to his race. He recalled that before one march near his hometown in Mobile, Ala., his mother called and warned him not to go. His grandfather had threatened to shoot him if he saw him.

Zellner’s journey into the civil rights movement began as a sociology student at Huntingdon College in Montgomery, Ala. As an assignment, he and his fellow students were asked to solve the race problem. At the time Martin Luther King Jr. was in Montgomery, Ala. for the bus boycotts, so Zellner and a few other sociology students decided to go see him. The meeting transformed Zellner’s life.

Their professor, and later King himself, warned them that getting involved meant they would be arrested. It was illegal to break the racial barriers of segregation. Despite these warnings, the students did attend a meeting- also attended by King and Rosa Parks – at a church during the visit, and as predicted, the group was arrested. For Zellner, it was the first of many.

Throughout the 1960s, Zellner would be arrested 18 times in seven states, charged with everything from criminal anarchy to “inciting the black population to acts of war and violence.” Before that first arrest, Zellner admitted he was afraid. But Parks gave him some advice that gave him courage, and it still sticks with him to this day.

“If you see something wrong, eventually you’re going to have to do something about it. You can’t just study it,” she told Zellner at the time.

From then on things would change. He became a field secretary for the Student Nonviolent Coordinating Committee, participating in marches, protesting the injustices of segregation and taking part in organizing the Freedom Riders of 1961.The Freedom Riders were an organized group of civil rights activists who rode buses into the south to test the new Supreme Court decision that outlawed racial segregation in restaurants and waiting rooms in terminals serving buses that crossed state lines

“We didn’t always understand what we were involved in or it being such a significant movement of history,” Zellner said. “Wherever the worst problem was, was where we’d go.”

Advocates of social justice are still needed today, he said. At places like PLU and through places like the Diversity Center, that work can flourish to go out into the world.

“I just got out of the home room of the Diversity Center and it sure feels like home,” Zellner told the students at the beginning of his presentation.

Much of Zellner’s story can be found in his memoir, The Wrong Side of Murder Creek: A White Southerner in the Freedom Movement. (New South Books, 2008).

“What I learned in the civil rights movement is still true today, ‘Brotherhood is not so wild a dream as those, who profit by postponing it, pretend,’” Zellner said, quoting journalist Eric Sevareid.