“Overexposed: The Cost of Compassion”

Three PLU student filmmakers spent more than a year researching the cumulative effects of tragedy and trauma, which will soon be unveiled in a new documentary – “Overexposed: The Cost of Compassion.” The documentary focuses on the idea that there is a human toll associated with 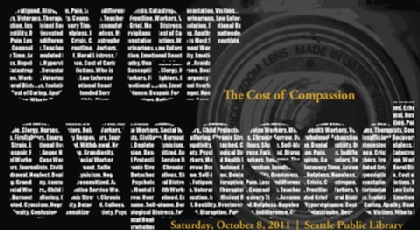 The new documentary from MediaLab, “Overexposed: The Cost of Compassion,” examines and defines “compassion fatigue.”
repeated exposure to trauma and suffering. Seniors Elizabeth Herzfeldt-Kamprath and Hailey Rile, along with junior Katie Scaff, first learned of the condition “compassion fatigue” last fall and soon decided to make it the topic of their new film.

“After reading a little bit about what compassion fatigue is,” Scaff said, “we realized that this was an important issue that more people need to be aware of.”

The films title actually came to the team during one of more than 60 interviews conducted.

During their research, the students traveled across the United States and Canada in search of people with unique stories to tell. In New Orleans, they met a sexual trauma nurse, multiple survivors of Hurricane Katrina, and a nationally renowned expert who wrote the first book about compassion fatigue. All together, they traveled 12,000 miles by car, train and plane to visit California, Illinois, Washington D.C., New York City, and Ontario, Canada, where they attended the first Compassion Fatigue conference.

“It’s been a busy year, but we’ve learned so much,” Scaff said. “Our goal now is to bring awareness to this issue, so people can identify it and know how to cope.”

Rile and Scaff, both communication majors concentrating in journalism, as well as Herzfeldt-Kamprath, a English major and communication minor, are members of PLU’s MediaLab.

Established in 2006, MediaLab provides students with opportunities to explore various methods of mass communication. “Overexposed” marks the seventh film produced by MediaLab, which has received national recognition for its work, including one Emmy Award and three consecutive Emmy nominations.