Benson lecturer poses question: Would slavery have ended without the Civil War?

If the Civil War didn’t end slavery, something else would have, said history professor Peter A. Coclanis.

By 1861 slavery was dying out,” Coclanis said , who teaches at the University of North Carolina in Chapel Hill. Slavery probably would not have survived much longer.

Coclanis presented a lecture entitled, “Would Slavery Have Survived Without the Civil War? A Counterfactual Analysis,” on Monday, October 3, at the 7th Annual Dale E. Benson Lecture in Business and Economic History. 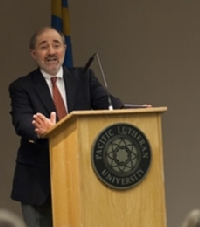 The lectureship, which was established by the Benson Family Foundation during the 2005-2006 academic year, brings to campus outstanding members of the academic and business community. The topic for the night’s lecture came from a debate Coclanis had with economic historian Stanley Engerman in November 2009. In both debates he argued that based on economic reasoning slavery would not have survived much longer without the Civil War.

His argument focused on the profitability and viability of slavery on the eve of the Civil War.

Despite the rising prices of slaves and the profitability to slaveholders, and to some degree, non-slaveholders and northern and European consumers, Coclanis argued that the economy was too dependent on slave labor.

“Slavery hindered the long-term development of the southern economy,” Coclanis said. “The South, in a relative sense, had been rendered into an economic backwater.”

With the invention of the reaper, many types of slavery were severely hurt; only cotton harvest, which was harder to mechanize, remained competitive in 1860.

Coclanis argued that despite his findings though, he couldn’t pinpoint when slavery would have ended, or how.

“None of this is to say that slavery would have collapsed in 1861,” Coclanis said, “or that it would have lasted another 100 years. We can never know for sure how long slavery would remain viable in the South. Assessing slavery’s long-term effects on the south… is extremely difficult.”By the time of the war slavery was a part of every aspect of life.

All the discrepancies in data and factors that can’t be isolated “has rendered the debate of the economics of slavery a contact sport,” Coclanis said, sparking a few chuckles from his crowd.

Coclanis said he doesn’t think slavery would have completely vanished without the Civil War.

Instead, Coclanis said, it was more likely that “a closely controlled labor system, not that distinct from the slave system,” would have replaced slavery.

Coclanis argued that by the 1870s or 1880s without a civil war slavery would have evolved into something else, and he emphasized this by ending his speech with a quote by T.S. Eliot.

Many who attended Coclanis’s lecture said they appreciated the different perspective through which he analyzed slavery.

“I thought it was very interesting looking at it through the economic standpoint,” said junior communication major Chelsea Paulsen.

“It’s not very often we get to see or talk about the economic side,” said Parkland resident Theresa Reda Martinez. “”It still has ramifications in today’s life. Slavery wasn’t that long ago.”