Five Lutes took the stage in the summer  of 2011 for Seattle Opera’s production of ‘Porgy and Bess.’ (Photo courtesy of Seattle Opera)

The recent Seattle Opera production of “Porgy and Bess” turned into something of a Lute reunion this summer, as five Lutes showed up for rehearsals and, after looking around, realized they were all fellow alums. 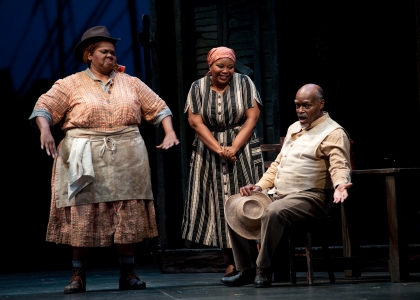 Five Lutes, including Marlette Buchannan Hall who is pictured in the middle, took the stage this summer for Seattle Opera’s production of ‘Porgy and Bess.’ (Photo courtesy of the Seattle Opera)
Amy Van Mechelen ’08 had just finished up her master’s degree in music at Colorado State University and had moved back to the Tacoma area. She auditioned for the chorus of Porgy and Bess,and didn’t think she’d get a part. But she did. And she was surprised by how much work the chorus had on stage.“The chorus is on the stage almost all the time and is an integral part of the opera,” Van Mechelen said.
After a taste of this, Van Mechelen knows that singing is what she wants to do with her life. She arrived at PLU as a transfer student. “I went into audition for the music program and the faculty was so warm and inviting … It just felt like home,” she said.