From campus tree to campus artwork 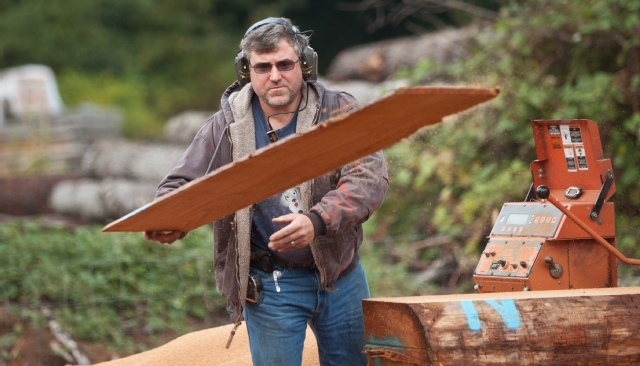 Chris Fry ’91, of NW Wood, cuts a plank on his mill in Tacoma. Fry milled the wood from trees cut this summer into panels that now adorn the new Studio Theater. (Photo by John Froschauer)

To the casual observer, the higgly piggly stacks around his five acres may seem a jumbled mess. But to Chris Fry, ’91, each stack of wood, each plank, is a work of art, just waiting for the right stain, cut or use.

That was certainly true of the logs that Fry, owner of NW wood,cut from the PLU campus this summer. In, all some 20 trees, some as tall as 90 feet, were cut down to make way for emergency access and for root rot. About 40 trees were replanted in their place, including dogwoods, red cedar, red maples, cascara and birch.
http://www.youtube.com/watch?v=hHICzdNP2rc

But all the trees that ended up on Fry’s five acres near the PLU campus were Douglas firs.

After arriving at Fry’s mill, one of the logs was cut into planks, and then in late summer, installed in the Studio Theater at the future Karen Hille Phillips Center for the Performing Arts. The golden honey-colored panels can be seen as a visitor enters the theater.

Walking through the hundreds cuts of wood in his warehouse, Fry sees each grain – which may be a rather dull gray or beige now, as how it will become once its sanded and stained. Originally starting the mill for hobbyists, Fry moved into the commercial sector in about 2003. The request to cut the logs for the PLU theater was his first campus job, he said.

Fry has cut up wood for dormitories, for cabinets and even for sculptures. One load of wood drying in his kiln now came from the Seattle lumber freighter, The Winona, before it was cut up for scrap. Its wood is destined for a sculpture planned for the Seattle Museum of History and Industry. But not all the jobs he takes on are large ones. The Seattle Art Museum put in a request for a rare Asian wood so they could replace a finger of a Buddha that had been snapped off by a tourist.

Although the wood has been installed in Eastvold, this doesn’t mean Fry will cut his business connections with his alma mater. He still has huge logs stacked up on his back lot – watched over by a bored llama that his former partner left him to take care of  – that will also be milled for projects on campus, such as replacing the furniture at Eastvold Chapel, or creating at table for Gonyea House.

“I guess that’s what I like about my job,” Fry said. “There’s always something interesting to do each day.”