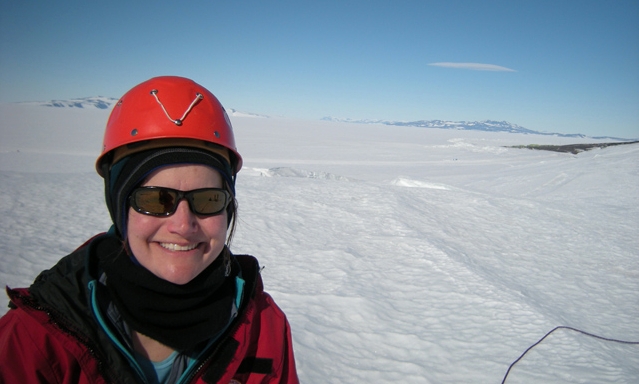 Geosciences professor Claire Todd and her student, Matthew Hegland ’13, will be heading down to Antarctica to study rocks during the next two months. This is Todd’s fourth trip to the Antarctic.

Rock On II: Prof and student head back to the frozen continent

The way Matthew Hegland ’13 figures it, while he’s collecting rocks and bundled up in his parka in Antarctica next month, he’ll probably actually be warmer than his parents – who will be surviving another Minnesota winter.

Hegland will be accompanying geosciences professor Claire Todd as the pair spends 40 days, including Christmas, studying deglaciation in the Antarctic. In English, this means studying how ice has melted in Antarctica over the millennia. The temperatures last time Todd travelled to the frozen continent hovered just around zero degrees Fahrenheit. And surprisingly, the elevation is just about 2000 feet above sea level. Hegland worked at much higher elevations when he was on a research team in the Andes.

On this day in late November, Hegland and Todd were busy reviewing rocks brought back from Todd’s 2010 trip.

The “rock boxes” as they are known, will be filled with food, which will then promptly be eaten through the next three months. Once empty, the boxes will fill up with rock samples collected from the mountains about 1,000 miles from McMurdo Station, the jumping off point for all Antarctic study teams. Hegland, who is considering graduate school after he finishes his undergrad degree in geosciences, will be the only new member of the team that includes researchers from the University of Washington, the University of Maine and Berkeley Geochronology Center. And of course, a mountaineering expert.

The trip is funded through a National Science Foundation grant secured by Todd, who is making her fourth trip back to the Antarctic. It never gets old, she said.

“There is always something new to see, at a new location,” she said.

Todd and Hegland obviously can’t wait to get packed. On Nov. 27, while the rest of us are still watching movies, eating leftovers or browsing for a few bargains at the mall, this pair will be heading off to New Zealand, and then on to McMurdo Station on Dec. 1. On Dec. 13, the team will head out to the field research site and then for the next 40 days, be collecting and analyzing rocks – with the exception of taking a well-earned break on Christmas Day.

“We already shipped our Christmas presents and treats down there,” Todd said. “We’ll be opening them up on Christmas morning.”

They will return to the PLU campus in mid to late January. But you can follow Hegland and Todd on the Antarctica blog as they pack and train for their trip.