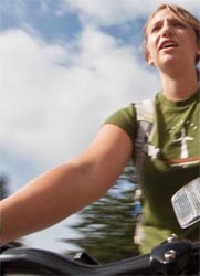 Alyssa Henry ’12 found herself pedaling across Massachusetts for what she later called the most amazing summer she’s ever had. “It inspired me to get busy and not be afraid to fail.”

The environmental studies major from Kent, Wash., had already spent her spring term in Denmark as a part of a study-away program through PLU’s Wang Center for Global Education.

But when someone suggested she apply for an internship where she would ride her bike 800 miles through Massachusetts, she said to herself:

Never mind that Alyssa didn’t own a bike. In fact, she hadn’t really ridden much since her junior-high days.

But after a completed application and visit to the “bikes for sale” section of Craigslist, Henry found herself pedaling across Massachusetts for what she later called the most amazing summer she’s ever had. The internship was with a nonprofit called New England Climate Summer. Their project was to travel in groups of six or seven, meeting with individuals, community groups or government officials in hopes of finding ways to lessen their dependency on fossil fuels.

Henry’s group would travel 30 to 50 miles a day, sleeping in churches or – when they were lucky – in the homes of well-wishers, where they would sometimes get a warm meal, do laundry or take a shower.

“Showing up in a community and having to rely on the kindness of the people living in that community – it re-affirmed my faith in humanity,” she said.

More than simply a character-building exercise, Henry found the summer to be a great skill-building exercise, too. She really developed her ability to speak before large groups, and she built her community-organizing skills, too. She was made the new media coordinator for her group, organizing meetings and generating publicity to newspapers, community groups and others. She was even sometimes her group’s resident bike mechanic.

Perhaps most importantly, Henry discovered her passion. She loved being outdoors, on her bike, traveling with newfound friends talking with others about issues she deeply cares about. And it made her think about the endless possibilities for her future.

Peace Corps? Environmental work? Community organizing? Henry doesn’t know what’s next. But she does know not to be afraid of the uncertainty.

“This summer inspired me to get busy and not be afraid to fail,” Henry said.

“It was one of those summers I don’t know if I’ll ever get again.”