Patricia Krise: A dedication to service and student engagement

Patricia Krise: A dedication to service and student engagement

Focused. In a word, that would describe Patricia Krise. And friendly too.

As she sits down for coffee outside the Old Main Market, she will admit that focus is a skill that has come in handy during her last 25 years of working for the Ford Motor Company and the Nissan Motor Corporation. She plans to continue to telecommute for Ford, working on Detroit time, so late afternoons and evenings can be left free for campus events and activities.

“My main job here is to support Tom in his role, to help in any way possible. And to reach out to students,” Krise said.

She is currently working as a project manager for Ford Motor Credit. Her team looks for process improvements in Ford properties in the U.S., Canada and India. She is the early-bird of the team, often rising in the early morning to send work emails across the globe. 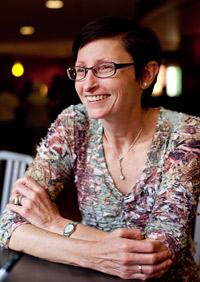 Patricia Krise was immediately impressed by the warmth and dedication to vocation on campus. (Photo by John Froschauer)

Prior to her current position, she was a member of the executive team that set up a 1,200-person call center in Colorado Springs. She met her future husband, however, when she was working as a sales representative for Ford in a territory that included Minot, N.D. She noticed Thomas Krise as they exited an aerobics class a the same time.

“I’m sure it would be Pilates now, but there wasn’t much to do in Minot then,” she laughed. “I guess you could call us both exercise fanatics.” She’s a third generation Ford employee – and yes, both Krises drive Ford Mustangs – although she stresses that after receiving her MBA from Miami University in Ohio, she really hadn’t planned to continue the family tradition, it was just the first place she found a job.

The Indianapolis native received her bachelor of arts degree in business from Hanover College in Indiana, where she played D-III volleyball and basketball.

Krise was impressed by PLU when her husband was a candidate, when she was asked over and over what she would like to do here. She was also impressed by the warmth and dedication to vocation on campus. And also the personal drive that led students to show up early in the morning to meet a presidential candidate. “It was 8 a.m. and we expected a few students to show up,” she recalled.

“Instead about 20 were there and asked tough, sharp questions.”

She also learned early that there are Lutes everywhere. When word spread that her husband had accepted the position to become PLU’s 13th president, both their emails where flooded with congratulations from Lutes on campus welcoming them to PLU. On the move from Stockton, Calif., they stopped by Ashland, Ore., at a bed and breakfast. The only other guests there were, of course, Lutes.