Care for the world, service to mankind

Care for the world, service to mankind

Brian Bradshaw ’07 was walking down the stairs of his residence hall when he saw a young woman crying in the lobby. She had a bad day and it had destroyed her in that moment. Bradshaw was planning on going skiing that day. He stopped to talk to her and after listening said, “Come with me.”

He said, “Yeah and you’re coming with me.”

They spent the day on the slopes and her tears changed from sadness to joy.

“That was just the sort of person he was,” recalled Paul Bradshaw, his father. “He was always reaching out to other people.” 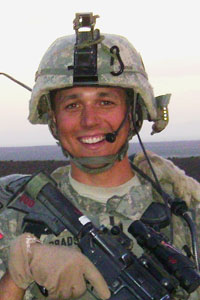 Lt. Brian Bradshaw, died from wounds suffered when an improvised bomb went off near his vehicle while deployed in Afghanistan.

In 2009, Lt. Brian Bradshaw, died from wounds suffered when an improvised bomb went off near his vehicle while deployed in Afghanistan. It would be the end of his life, but not the end of his impact on the world. To honor Brian, his father, Paul, and mother Mary Bradshaw, started an endowed scholarship at PLU for ROTC cadets and veterans. An ROTC scholarship brought Brian to PLU, Mary said. He always believed that an education was the key to opportunity, she said.”PLU turned out to be a very good fit for him,” Mary said. “Especially in the ROTC program, he really connected with a  lot of folks there.”

Brian was an active force at PLU, not only as an ROTC cadet, but as a photographer for the school newspaper – The Mast, a member of ski club and someone who was always there to pick those up who needed it.

One year Brian led a group of cadets in the National Ranger Challenge competition and they won.

“There were several parents who came up to us who said their kids could not have made it through ROTC without Brian,” Mary said. “He could get people to do things that they didn’t think they could possibly do.”

Paul said, he thought some of what made Brian who he was, started as a young boy. He was small for his age and excluded in games or being bullied was part of his life.

“It was clear to me from that point on he always stuck up for the under dog,” Paul said. “He wanted everybody to be included and he didn’t want anybody to miss an opportunity.”

The endowed scholarship will open the door for more people to gain an education. While in Afghanistan, Brian was always reading when he had the chance. Many of his soldiers would ask, “why do you read so much?”

He explained to them that an education was what made the difference in who we are, how we treat other people, and how we see the world. Brian was always connected to people through service to his fellow man and community.

The Brian Bradshaw ’07 Endowed Scholarship will make the difference in providing the opportunity to have an education.

“He was always reaching out to other people,” Mary said.

And he still is today.