A recommitment to sustainability 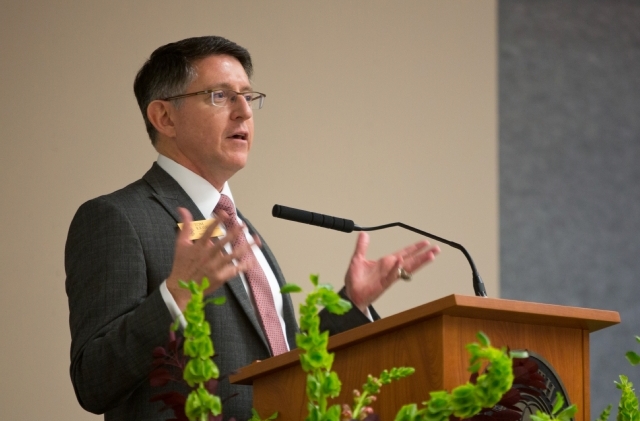 PLU President Thomas W. Krise talks about the importance of sustainability at the university after signing the American College and University Presidents’ Climate Commitment agreement in October. (Photos by John Froschauer)

Global warming is real. Humans have caused it. And it’s our responsibility to do all we can to mitigate and if possible, reverse it.

With a flick of his pen last week, President Thomas W. Krise reaffirmed the PLU community’s belief in these concepts and its commitment to lowering the university’s carbon footprint and encouraging recycling and renewable energy as outlined in the American College and University Presidents’ Climate Commitment agreement. He formally signed the agreement at a ceremony Oct. 30.

Krise signed the document,  first signed by his predecessor, Loren Anderson in 2007, and then noted that at a seminar for new college and university presidents at Harvard University this summer, the presidents asked for and received a session on environmental sustainability. Anderson was one of the 12 founding

signatories of the agreement. Since then, 661 universities have signed, while PLU’s reputation in this area as grown.

Several of the future goals for PLU include incorporating a carbon offset for air travel by 2014 and using more geothermal energy in the halls and buildings.

During the ceremony, it was announced that Hinderlie Hall won this fall’s unPLUg challenge to reduce energy consumption by 16 percent, when compared with last year’s figures. All the residence halls on campus lowered their energy usage, said Christine Cooley, manager of PLU’s sustainability office, and these savings continue throughout the year.

Since PLU began its sustainability program, the university has saved $71,000 in natural gas costs, $66,000 in electricity costs and raised over $100,000 in grants and rebates from the Green Partnership Fund, the Bonneville Environmental Foundation and other utility companies, she said. Vice President of Finance and Operations, Sheri Tonn, noted that since PLU began tracking its carbon emissions, the most recent carbon inventory shows a 17 percent drop. Another emissions inventory is planned for next June.

All this recycling and reduction in energy use has gained PLU a national reputation, she said. In 2010, PLU scored an “A” in the Sustainable Endowments Institute Report Card and the Sierra Club’s Cool Schools Competition has consistently ranked PLU in the top 100 green schools in the U.S.